La Guera Rodriguez: The Life and Legends of a Mexican Independence Heroine (Hardcover) 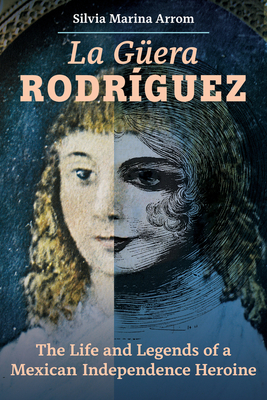 La Guera Rodriguez: The Life and Legends of a Mexican Independence Heroine (Hardcover)


Not On Our Shelves—Ships in 1-5 Days
Fact is torn from fiction in this first biography of Mexico’s famous independence heroine, which also traces her subsequent journey from history to myth.

María Ignacia Rodríguez de Velasco y Osorio Barba (1778–1850) is an iconic figure in Mexican history. Known by the nickname “La Güera Rodríguez” because she was so fair, she is said to have possessed a remarkably sharp wit, a face fit for statuary, and a penchant for defying the status quo. Charming influential figures such as Simon Bolívar, Alexander von Humboldt, and Agustín de Iturbide, she utilized gold and guile in equal measure to support the independence movement—or so the stories say.

In La Güera Rodríguez, Silvia Marina Arrom approaches the legends of Rodríguez de Velasco with a keen eye, seeking to disentangle the woman from the myth. Arrom uses a wide array of primary sources from the period to piece together an intimate portrait of this remarkable woman, followed by a review of her evolving representation in Mexican arts and letters that shows how the legends became ever more fanciful after her death. How much of the story is rooted in fact, and how much is fiction sculpted to fit the cultural sensibilities of a given moment in time? In our contemporary moment of unprecedented misinformation, it is particularly relevant to analyze how and why falsehoods become part of historical memory. La Güera Rodriguez will prove an indispensable resource for those searching to understand late-colonial Mexico, the role of women in the independence movement, and the use of historic figures in crafting national narratives.
Silvia Marina Arrom is Jane’s Professor Emerita of Latin American Studies at Brandeis University. She has published widely on Mexican social history, with books and articles focusing on women and gender, the family, social welfare, and the poor.
"The charm and the impact of this brilliant study owe, in part, to the reader’s cool distance from the fiery fiction of writers who stoked embers in the dry archives of la Güera’s life. We know more than they did. But along with knowing, we experience another level of enjoyment in Arrom’s book. It is the exposure to fiction and fantasy. Silvia Arrom manages to give us both pleasures, the hot and the cold."
— ReVista: Harvard Review of Latin America

"This book will fascinate readers. . . .[it turns] a life into a literary tale."
— Hispanic American Historical Review