The Kingdom of Rye: A Brief History of Russian Food (California Studies in Food and Culture #77) (Hardcover) 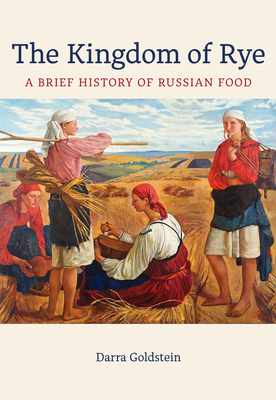 The Kingdom of Rye: A Brief History of Russian Food (California Studies in Food and Culture #77) (Hardcover)


In Stock—Click for Locations
Celebrated food scholar Darra Goldstein takes readers on a vivid tour of history and culture through Russian cuisine.

The Kingdom of Rye unearths the foods and flavors of the Russian land. Preeminent food studies scholar Darra Goldstein offers readers a concise, engaging, and gorgeously crafted story of Russian cuisine and culture. This story demonstrates how national identity is revealed through food—and how people know who they are by what they eat together. The Kingdom of Rye examines the Russians' ingenuity in overcoming hunger, a difficult climate, and a history of political hardship while deciphering Russia's social structures from within. This is a domestic history of Russian food that serves up a deeper history, demonstrating that the wooden spoon is mightier than the scepter.

Darra Goldstein is the Willcox B. and Harriet M. Adsit Professor of Russian, Emerita, at Williams College and founding editor of Gastronomica. She is author of six award-winning cookbooks, including Beyond the North Wind: Russia in Recipes and Lore.

"Brief, but enlightening. . . . Deeply appreciative of Russian cuisine . . .  and the ability of Russian cooks to take whatever was available and turn it into something edible and memorable."

"Replete not only with life and enthusiasm, but also with a deep wellspring of? ?knowledge. . . . A wonderful, rich and thought-provoking book?."
— The TLS