Shaking Up the City: Ignorance, Inequality, and the Urban Question (Paperback) 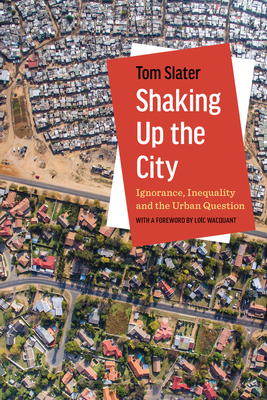 Shaking Up the City: Ignorance, Inequality, and the Urban Question (Paperback)


Not On Our Shelves—Ships in 1-5 Days
Shaking Up the City critically examines many of the concepts and categories within mainstream urban studies that serve dubious policy agendas. Through a combination of theory and empirical evidence, Tom Slater “shakes up” mainstream urban studies in a concise and pointed fashion by turning on its head much of the prevailing wisdom in the field. To this end, he explores the themes of data-driven innovation, urban resilience, gentrification, displacement and rent control, neighborhood effects, territorial stigmatization, and ethnoracial segregation.

With important contributions to ongoing debates in sociology, geography, urban planning, and public policy, this book engages closely with struggles for land rights and housing justice to offer numerous insights for scholarship and political action to guard against the spread of an urbanism rooted in vested interest.

Tom Slater is Professor of Urban Geography at the University of Edinburgh, Scotland.

"Slater’s broad approach and global lens grant this book great potential to help scholars, especially younger ones, to rethink the logic behind research questions and approaches."

"Sitting down with Shaking Up the City: Ignorance, Inequality, and the Urban Question is like pulling up a chair with Tom Slater to talk about the state of play of urban studies. . . .Yet the highlight of this work is the intellectual contribution, which I see as holding the idea of epistemology – that is, the production of knowledge – and the idea of agnotology – that is, the production of ignorance – in tension with each other."

"Shaking Up the City sets a new direction of critical urban geography."
— Antipode