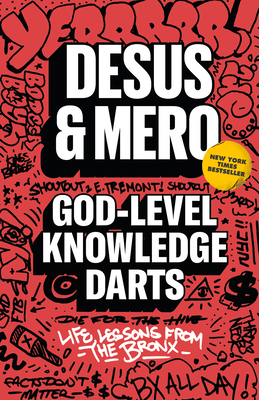 
In Stock—Click for Locations
NEW YORK TIMES BESTSELLER • “Desus & Mero are smarter and funnier than everyone writing books.”—Shea Serrano
“I will never write anything as hilarious as they have. I give up.”—Malcolm Gladwell
“These motherf***ers make me laugh until I choke.”—Jia Tolentino

NAMED ONE OF THE BEST BOOKS OF THE YEAR BY NPR

A wild, hilarious guide to life from the hosts of the hit late-night show Desus & Mero and the Bodega Boys podcast

Who could have predicted that, after a fateful meeting in a Bronx summer school in the 1990s, Desus & Mero would turn their friendship into an empire of talking to each other. And it’s no surprise—tuning in to them is like listening to the funniest, smartest people you know dissect a topic and then light it on fire. Now they’ve written the most essential guide to life of this century*, in which all the important questions are asked: How do I talk to my kids about drugs if I do them, too? What are the ethics of ghosting in a relationship? How do I bet on sports? How should I behave in jail? How much is too much to spend on sneakers? Is porn really that bad for me?

As they put it: “We want to share all we’ve learned, after years in the Bronx streets, with you: the people. So with a lifetime spent building up a plethora of information from trials and tribulations and a handful of misdemeanors, we decided to write this book—a sequel to the Bible, or maybe to The Hitchhiker’s Guide to the Galaxy,depending on how big a nerd you are. Let this book be your North Star.”

*NO REFUNDS
Desus Nice and The Kid Mero are multitalented comedians, writers, and podcasters who currently co-host Showtime's first-ever late-night talk show, Desus & Mero, as well as the long-running Bodega Boys podcast.
“Listen, we all knew that Desus & Mero were smarter and funnier than everyone making TV. I’m sad to now report: They’re smarter and funnier than everyone writing books, too. God-Level Knowledge Darts is a delight. It’s consistently hilarious and surprisingly tender. Every single page made me laugh.”—#1 New York Times bestselling author Shea Serrano

“Desus & Mero getting famous is one of the greatest cultural blessings in recent history. They are quite possibly the only acceptable source of popular wisdom, and this book is wonderful and ridiculous—these motherf***ers make me laugh until I choke.”—Jia Tolentino, bestselling author of Trick Mirror