Inside Comedy: The Soul, Wit, and Bite of Comedy and Comedians of the Last Five Decades (Hardcover) 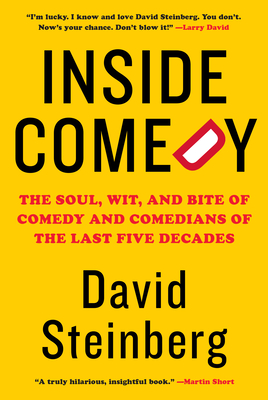 Inside Comedy: The Soul, Wit, and Bite of Comedy and Comedians of the Last Five Decades (Hardcover)


On Our Shelves Now at:
The world of comedy and comedians of the last five decades. By the man the New York Times calls "a comic institution himself," the only comedian (twenty-six years in stand-up) to have made Elie Wiesel laugh, as well as having appeared on The Tonight Show (140 times, second only to Bob Hope, but who's counting). From the director of TV comedy series Mad About You, Seinfeld, Friends, Weeds and Curb Your Enthusiasm.

“David has always been a comedy hero to me. One of his many gifts is the ability to inspire funny people to be even funnier, as you will discover in this truly hilarious, insightful book.” --Martin Short


From David Steinberg, a rabbi's son from Winnipeg, Canada, who at age fifteen enrolled at Hebrew Theological College in Chicago (the rabbinate wasn't for him) and four years later, entered the master's program in English literature at the University of Chicago, until he saw Lenny Bruce, the "Blue Boy" of Comedy, the coolest guy Steinberg had ever seen, and joined Chicago's Second City improvisational group, becoming, instead, the comedian's comedian, director, actor, working with, inspired by, teaching, and learning from the most celebrated, admired, complicated comedians, then and now--a funny, moving, provocative, insightful look into the soul, wit, and bite of comedy and comedians--a universe unto itself--of the last half-century.

Steinberg, through stories, reminiscences, tales of directing, touring, performing, and, through the comedians themselves talking (from more than 75 interviews), makes clear why he loves comedy and comedians who have been by his side in his work, and in his life, for more than sixty years.

Here are: Will Ferrell, Eric Idle, Whoopi Goldberg, Mike Myers, Groucho himself and the greatest of them all (at least of the last half century), Jonathan Winters . . .
DAVID STEINBERG is a Canadian comedian, actor, writer, director, and author.
“If you can think of a famous comedian, Steinberg has probably worked with them . . . His new book provides a backstage pass to life in comedy . . . Steinberg paints deep and intimate portraits of the comedians we know and love . . . the stories Steinberg tells are a true delight. He is funny, warm, and heartfelt as he recounts life in an industry it is clear he deeply loves. [Steinberg] speaks of his fellow comedians with endless admiration and respect, making it impossible not to fall in love with each one of them. Lovers of comedy will surely adore this adventure behind the scenes.”—Associated Press

“A memoir that nearly qualifies as a history of American comedy during the last six decades . . . illuminating . . . Steinberg’s recollections are vivid as they are hilarious.”—Booklist

“Steinberg remains a master raconteur. Relax, enjoy the joke. Nobody gets out of here alive. Revel in David Steinberg.”—Hartford Courant

“If I had written this, it would be filled with jealousy, envy, and snide remarks. But fortunately, David Steinberg wrote it, so it abounds with insights, humor, and joy. I loved it so much!”—Steve Martin

“At first glance, David Steinberg might seem like too much of a mensch to really spill the beans about his chosen profession . . . the venerated stand-up comic, actor, and sitcom director, has impeccable nice-guy credentials . . . [He] truly admires his peers and understands what makes them tick. And he proves to be a genial, generous raconteur and reciter of showbiz lore . . . charming.”—Dave Itzkoff, The New York Times

“David has always been a comedy hero to me. One of his many gifts is the ability to inspire funny people to be even funnier, as you will discover in this truly hilarious, insightful book.”—Martin Short

“Being a part of David's life and now this wonderful book has been a special joy. He's hilarious, and brilliant, plus you can talk to him about anything, and he doesn't charge you for it. This book is like going to a comedy museum except you can laugh out loud and nobody says, ‘Shhh’. . .”—Billy Crystal

“David Steinberg is one of the funniest men on the planet. His book is just like his comedy—wickedly smart, emotional, revealing and hilarious. I loved this book.”—Don Winslow, #1 internationally bestselling author of The Cartel, The Force, and The Border

“David’s memories blow me away. All these years later, he remembers that Elaine May sat in the front row at the Hollywood Bowl and roared at my routine at the first gay rights fundraising concert. He also reminded me that Richard Pryor wrote for my 1973 Lily Tomlin TV special! In the words of Edith Ann, ‘and that’s the truth!’”—Lily Tomlin

“David Steinberg has always been one of my favorite comedians. I memorized his album, Disguised as a Normal Person when it came out. It was a huge thrill to work with him when he directed some episodes of Seinfeld. He will always be one of my comedy heroes.”—Jerry Seinfeld

“David is truly a national treasure, even though he’s Canadian, who is loved, admired and revered by all in the comedy world. You’re going to have a great time reading these stories about all the comedic greats by one of the greatest.”—Susie Essman