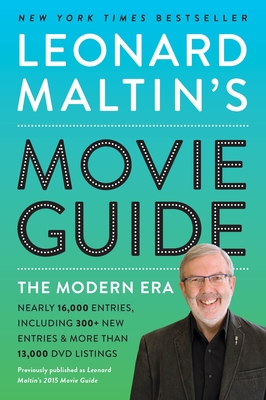 
Not On Our Shelves—Ships in 1-5 Days
Previously published as Leonard Maltin’s 2015 Movie Guide, this capstone edition includes a new Introduction by the author. (Note: No new reviews have been added to this edition)

Now that streaming services like Netflix and Hulu can deliver thousands of movies at the touch of a button, the only question is: What should I watch?

Summer blockbusters and independent sleepers; the masterworks of Alfred Hitchcock, Billy Wilder, and Martin Scorsese; the timeless comedy of the Marx Brothers and Woody Allen; animated classics from Walt Disney and Pixar; the finest foreign films ever made. This capstone edition covers the modern era while including all the great older films you can’t afford to miss—and those you can—from box-office smashes to cult classics to forgotten gems to forgettable bombs, listed alphabetically, and complete with all the essential information you could ask for.

With nearly 16,000 entries and more than 13,000 DVD listings, Leonard Maltin's Movie Guide remains “head and shoulders above the rest.” (The New York Times) Also included are a list of mail-order and online sources for buying and renting DVDs and videos, official motion picture code ratings from G to NC-17, and Leonard's list of recommended films.
Leonard Maltin is one of America’s most respected film critics and historians. His many books include Of Mice and Magic: A History of American Animated Cartoons, Leonard Maltin's 151 Best Movies You've Never See, and Leonard Maltin’s Movie Guide. He regularly appears on ReelzChannel and Turner Classic Movies and hosts a weekly podcast, Maltin on Movies, with his daughter, Jessie. He lives in Los Angeles, California.
Praise for Leonard Maltin’s Movie Guides

“Easily the most comprehensive book of its kind anywhere. It belongs next to ever TV...in every home.”—USA Today

“Distinctive, authoritative and personal. Its prose is so spare, rarely betraying biases or eccentricities, but the book lives so long precisely because ever page has Maltin’s unmistakable presence.”—NPR