The Power Law: Venture Capital and the Making of the New Future (Hardcover) 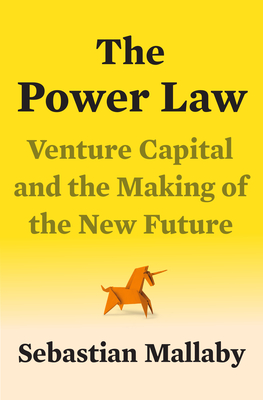 The Power Law: Venture Capital and the Making of the New Future (Hardcover)


On Our Shelves Now at:
Shortlisted for the Financial Times Business Book of the Year

“A gripping fly-on-the-wall story of the rise of this unique and important industry based on extensive interviews with some of the most successful venture capitalists.” - Daniel Rasmussen, Wall Street Journal

“A must-read for anyone seeking to understand modern-day Silicon Valley and even our economy writ large.” -Bethany McLean, The Washington Post

"A rare and unsettling look inside a subculture of unparalleled influence.” —Jane Mayer

Innovations rarely come from “experts.” Elon Musk was not an “electric car person” before he started Tesla. When it comes to improbable innovations, a legendary tech VC told Sebastian Mallaby, the future cannot be predicted, it can only be discovered. It is the nature of the venture-capital game that most attempts at discovery fail, but a very few succeed at such a scale that they more than make up for everything else. That extreme ratio of success and failure is the power law that drives the VC business, all of Silicon Valley, the wider tech sector, and, by extension, the world.

In The Power Law, Sebastian Mallaby has parlayed unprecedented access to the most celebrated venture capitalists of all time—the key figures at Sequoia, Kleiner Perkins, Accel, Benchmark, and Andreessen Horowitz, as well as Chinese partnerships such as Qiming and Capital Today—into a riveting blend of storytelling and analysis that unfurls the history of tech incubation, in the Valley and ultimately worldwide. We learn the unvarnished truth, often for the first time, about some of the most iconic triumphs and infamous disasters in Valley history, from the comedy of errors at the birth of Apple to the avalanche of venture money that fostered hubris at WeWork and Uber.

VCs’ relentless search for grand slams brews an obsession with the ideal of the lone entrepreneur-genius, and companies seen as potential “unicorns” are given intoxicating amounts of power, with sometimes disastrous results. On a more systemic level, the need to make outsized bets on unproven talent reinforces bias, with women and minorities still represented at woefully low levels. This does not just have social justice implications: as Mallaby relates, China’s homegrown VC sector, having learned at the Valley’s feet, is exploding and now has more women VC luminaries than America has ever had. Still, Silicon Valley VC remains the top incubator of business innovation anywhere—it is not where ideas come from so much as where they go to become the products and companies that create the future. By taking us so deeply into the VCs’ game, The Power Law helps us think about our own future through their eyes.
Sebastian Mallaby is the author of several books, including The Power Law, More Money Than God, The Man Who Knew, and The World's Banker. A former Financial Times contributing editor and two-time Pulitzer Prize finalist, Mallaby is the Paul A. Volcker Senior Fellow for International Economics at the Council on Foreign Relations.
Shortlisted for the Financial Times Business Book of the Year Award

“Sebastian Mallaby is the master of unspooling human drama from financial systems. Here, the venture capitalists are the protagonists. Whether it’s financiers scrambling to court a pajama-wearing young Mark Zuckerberg or venture capitalist Bill Gurley’s efforts to oust Uber founder Travis Kalanick from the company, the stories are almost Shakespearean in their depictions of ambition, jealousy and ego.” —NPR, “Books We Love 2022”

“A must-read for anyone seeking to understand modern-day Silicon Valley and even our economy writ large . . . Most people who write about Silicon Valley do so from the viewpoint of entrepreneurs who built companies with the backing of venture capitalists. Mallaby writes from the perspective of the venture capitalists themselves. He tells his story through an accumulation of smaller stories, each one phenomenally detailed and engaging.” —Bethany McLean, The Washington Post

"A gripping fly-on-the-wall story of the rise of this unique and important industry based on extensive interviews with some of the most successful venture capitalists . . . Mr. Mallaby writes a fast-paced narrative. He also has a journalist’s eye for revealing details” —Daniel Rasmussen, Wall Street Journal

“Sebastian Mallaby is the master of unspooling human drama from financial systems. Here, the venture capitalists are the protagonists. Whether it’s financiers scrambling to court a pajama-wearing young Mark Zuckerberg or venture capitalist Bill Gurley’s efforts to oust Uber founder Travis Kalanick from the company, the stories are almost Shakespearean in their depictions of ambition, jealousy and ego.” —Darian Woods, The Indicator

“Sebastian Mallaby's The Power Law: Venture Capital and the Making of the New Future is a rip-roaring read full of eccentric geniuses . . . A smart and consequential public intellectual, Mallaby has formulated a smart recipe to restore America (and the world) to vibrant equitable prosperity. He makes the case vividly in a new book which should be on every congressional desk . . . It may be the most informative and engaging economic narrative history since Liaquat Ahamed's Lords of Finance: The Bankers Who Broke the World which won the 2010 Pulitzer Prize in history.” —NewsMax

“How does the venture capital industry work its wonders? Is there a replicable formula for successful VC investing, or is it just a matter of being in the right place at the right time? And how secure is Silicon Valley’s dominance of the industry? Sebastian Mallaby’s absorbing new book, The Power Law: Venture Capital and the Art of Disruption seeks to answer these questions. . . . He brings his trademark mixture of exhaustive research and clear analysis to his most interesting subject so far.” —Adrian Wooldridge, Bloomberg

“As we face urgent man-made existential challenges from climate change to economic inequality, Sebastian Mallaby shows that the capitalists of Silicon Valley are shaping the future in ways few understand. In The Power Law he takes us inside their rarified world, showing the possibilities and shortcomings of their big egos and big bets. Mallaby's deep access enables us to get a rare and unsettling look inside a subculture of unparalleled influence.” —Jane Mayer, Chief Washington Correspondent, The New Yorker

“The Power Law should be on every tech founder’s—and self-reflective VC’s—reading list . . . Go and buy The Power Law.  It is a fantastic account of how American venture capital has developed and some of the most important rules that govern it. Let’s use Mallaby’s brilliantly executed observations of VC as an opening for a long-overdue, ongoing debate and continue our scrutiny of the kingmakers’ world.” —Sifted

“Mallaby writes with humor and historical sweep . . . His account is immensely enriched by interviews with most if not all of the rainmakers in venture capital.” —Prospect Magazine

“Venture capital has influenced the American economy for over half-a-century now, and finally we have a book of exceptional reporting, analysis and storytelling to bring that history to life. What makes Sebastian Mallaby’s The Power Law a classic is how deeply it takes us into VC's defining successes and failures—which are much harder to get anyone to talk frankly about. I’m not sure this is the book of VCs' dreams, but it’s what the rest of us have been waiting for.” —Charles Duhigg

“Returning to the rough and tumble of business, January also brings The Power Law (Allen Lane), in which author Sebastian Mallaby sets off into the world of venture capital and the strange bunch of financiers behind some of the most successful companies. It’s a tale of triumphs but also major failures, hubris and jaw-dropping eccentricity.” —Financial Times, Spring Preview

“Heavyweight and richly detailed, [The Power Law] is both a careening ride through the chaos of startup culture and a sober assessment of how the relationship between founders and their financiers has evolved.” —Strategy and Business

“A lucid, thoughtful, and entertaining account of high-wire capitalism at work.” —Publishers Weekly

“In this fascinating study of venture capitalists, Sebastian Mallaby explains why they invest with the sole purpose of winning the jackpot while the rest of us are advised to invest cautiously. A compelling story of flesh-and-blood financiers, sprinkled with insights from which all economists could learn.” —Mervyn King, former Governor of the Bank of England

“If you can read only one book on venture capital, this is the one. The Power Law narrates the evolution of venture capital from its origins in Silicon Valley to its emergence in China by following the ambitious and often idiosyncratic investors who finance risky new ventures while recognizing that success is rare, but transformative. The book is a fascinating read, and illustrates well one of its core themes, that venture capital is a network that straddles and offers the virtues of both markets and corporations.” —AnnaLee Saxenian, dean of the School of Information at University of California, Berkeley

“A fascinating journey through the tightly networked world of the venture capitalists who make Silicon Valley tick, from the scrappy dealmakers of the 1960s to the high-flying global investors of today. Filled with eye-opening case studies and vivid personalities, frank in its analysis of the industry’s greatest strengths and most dangerous blind spots, The Power Law is essential reading for understanding our tech-driven economy and where it might go next.” —Margaret O’Mara, author of The Code

“The Power Law is a remarkable book. It takes us inside venture capital from its origins with a handful of restless risk-takers to today’s powerhouses that reshape our world. Both a formidable researcher—he has gotten key players to talk with amazing candor—and a gifted storyteller, Mallaby captures the drama and clashes of an extraordinary gallery of people who—with insight and instincts, appetite for risk and tolerance for failure, unforgiving ego and relentless ambition—make big bets in the face of huge uncertainty. Yet all of them must ultimately answer to the ‘power law’—the reach for outsized returns. Mallaby does not shy away from detailing what has gone wrong, but he sees the ‘triumph of the network’ of Silicon Valley as also a triumph for the United States—though one now challenged by the mirror image that is rising up in China. The Power Law is an important book, for sure. It is destined to be of wide impact and lasting influence.” —Daniel Yergin, Pulitzer Prize-winning author of The Prize and The New Map

“Everyone talks about venture capital. We glorify it, we vilify it, and everywhere outside Silicon Valley envies it. At last we have a storyteller with the intelligence to understand venture capital, the diligence to dig out some astonishing tales, and the eloquence to make the journey of discovery such a pleasure. This is a superb book.” —Tim Harford, author of The Data Detective