The Ratline: The Exalted Life and Mysterious Death of a Nazi Fugitive (Paperback) 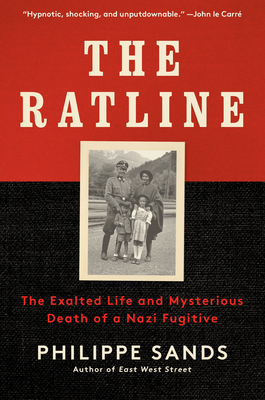 The Ratline: The Exalted Life and Mysterious Death of a Nazi Fugitive (Paperback)


On Our Shelves Now at:
A tale of Nazi lives, mass murder, love, Cold War espionage, a mysterious death in the Vatican, and the Nazi escape route to Perón's Argentina,"the Ratline"—from the author of the internationally acclaimed, award-winning East West Street.

Baron Otto von Wächter, a lawyer, husband, and father, was also a senior SS officer and war criminal, indicted for the murder of more than a hundred thousand Poles and Jews. Although he was given a new identity and life via “the Ratline” to Argentina, the escape route taken by thousands of other Nazis, Wächter and his plan were cut short by his mysterious, shocking death in Rome.

In the midst of the burgeoning Cold War, was he being recruited by the Americans or by the Soviets—or perhaps both? Or was he poisoned by one side or the other, as his son believes—or by both? With the cooperation of Wächter’s son Horst, who believes his father to have been “a good man,” award-winning author Philippe Sands draws on a trove of family correspondence to piece together Wächter’s extraordinary life before and during the war, his years evading justice, and his sudden, puzzling death. A riveting work of history, The Ratline is part historical detective story, part love story, part family memoir, and part Cold War espionage thriller.
PHILIPPE SANDS is an international lawyer and, since 2018, the president of English PEN. He is a frequent commentator on CNN and the BBC World Service. In 2003 he was appointed a Queen's Counsel. He lives in London.
“Extraordinary. . . . A Nazi love story, but a fascinating and important one, told in vivid detail. . . . Suspenseful.” —The New York Times Book Review

“A narrative of spycraft and power shifts . . . breathtaking in its twists. . . . Remarkable. . . . Horst, now in his eighties, is a fascinating character, willing to explore his father’s ugly history in great detail without letting go of the belief that he must have been a ‘good’ Nazi. . . . Carefully, gently, meticulously, [Sands has] engaged every protest, every excuse, every question Horst has raised to show exactly who Otto was and what he did.” —Los Angeles Times

“A feat of exhilarating storytelling— gripping, gratifying and morally robust. . . . A taut and finely crafted factual thriller, reminiscent in density and pace of John le Carré. . . . Sands is unflinching. . . . He pursues the details and we are left with the unsettling, discordant portrait of a man who is conceivably a passionate husband and devoted father, but irrefutably a war criminal with blood, including that of Sands’s own family members, on his hands.” —The Guardian

“Part detective story and part love story. . . . Sands’s ability to tease out Horst’s emotional, and often contradictory, views of his father as an indicted war criminal is fascinating. . . . He unlocks here a series of provocative questions about culpability, collective guilt, and the advancement of international law.” —Los Angeles Review of Books

“A gripping adventure, an astounding journey of discovery, and a terrifying and timely portrait of evil in all its complexity, banality, selfjustification, and madness. A stunning achievement.” —Stephen Fry

“A formidable piece of historical sleuthing written with all the pace and suspense of a thriller.” —Financial Times

“A compelling piece of forensic historical research—one that is every bit as good as East West Street.” —The Telegraph (London)

“Extraordinary. . . . Fast-paced. . . . With enough twists and turns to keep the reader grimly absorbed, The Ratline is an electrifying true crime.” —Evening Standard (London)

“Fascinating. . . . A portrait of not only the banality, but the domesticity of evil. . . . Compelling.” —The Mail on Sunday (London)

“Superbly researched and brilliantly told. . . . A fascinating account of the war between law and barbarism.” —New Statesman

“Breathtaking, gripping, and ultimately, shattering. Philippe Sands has done the unimaginable: look a butcher in the eye and tell his story without flinching.” —Elif Shafak, author of 10 minutes 38 seconds in This Strange World

“A triumph of research and brilliant storytelling.” —Antony Beevor author of The Battle of Arnhem

“Fascinating and haunting, The Ratline is a disquieting book that raises more questions than Sands could possibly answer. . . . A book that should be read and pondered again and again.” —BookPage

“[A] solemn, graceful, and powerful account. . . . Rich, compulsively readable. . . . A far-reaching whodunit into a mysterious death, where even the dead ends are engaging; a wartime love story between a highranking SS official and his ambitious wife (and a subtly corrosive portrait of their bewildering and criminal delusions as they enjoy their gilded life); a story of a son who desperately struggles in spite of condemning evidence ‘to find the good things’ in his deeply flawed parents; an infuriating spotlight on cynically pragmatic ties between American spymasters, the Vatican, and Nazi war criminals; and, in a revelation that blindsides the reader, a resourceful probing into buried familial ties.” —Publishers Weekly (starred review)