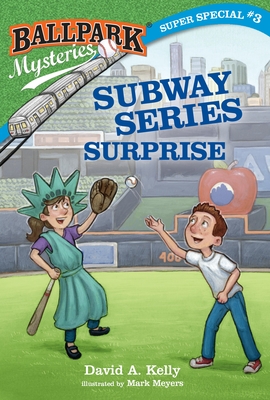 This is book number 3 in the Ballpark Mysteries series.

Mike and Kate are in for an extra special treat! Two hometown baseball teams in one city! A Subway Series is when the New York Mets play the New York Yankees, and Mike and Kate can't wait to watch all the action! But someone is playing pranks at both ballparks! And when Mike and Kate hear mysterious mumblings at the famous Whispering Gallery at Grand Central Terminal, they just might be able to catch the culprit before the series ends.

A longer story, plus bonus backmatter and NYC trivia, makes Subway Series Surprise a truly Super Special addition to the Ballpark Mysteries.
DAVID A. KELLY has written a picture book and chapter books for young readers, as well as for many newspapers and magazines. He lives in Newton, Massachusetts. You can learn more about the series at ballparkmysteries.com and look for David Kelly at davidakelly.com.

MARK MEYERS grew up in Utah and studied art at the Academy of Art University in San Francisco.