Divided By A Common Language: A Guide to British and American English (Hardcover) 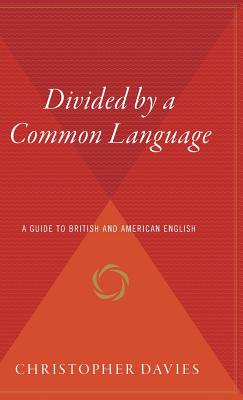 Divided By A Common Language: A Guide to British and American English (Hardcover)

Puzzled by signs warning you to mind the gap in the London Underground? Wondering what will be on your plate if you order toad in the hole from the menu of a London café? In Divided by a Common Language, Christopher Davies explains these expressions and discusses the many differences in pronunciation, spelling, and vocabulary between British and American English. He compares the customs, manners, and practical details of daily life in the United Kingdom and the United States, and American readers will enjoy his account of American culture as seen through an Englishman’s eyes. Davies tops it off with an amusing list of expressions that sound innocent enough in one country but make quite the opposite impression in the other. Two comprehensive glossaries help travelers translate from one variety of English to the other, and additional lists explain the distinctive words of Australia, New Zealand, and South Africa. Divided by a Common Language is the ideal travel companion for British visitors to the United States and American visitors to the United Kingdom. It is also the perfect book for Britons interested in American culture and Americans enjoying British novels, movies, and television at home.

CHRISTOPHER DAVIES was born and raised in England and spent several years living in Australia and New Zealand. In 1980 he settled in Florida. The many unfamiliar expressions and pronunciations that he encountered in American English led him to write Divided by a Common Language.