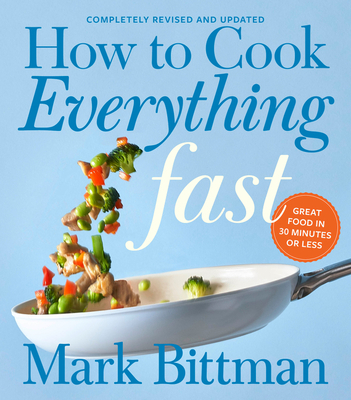 This is book number 6 in the How to Cook Everything Series series.

Featuring hundreds of easy and innovative recipes to get dinner on the table in no time flat, How To Cook Everything Fast Revised Edition, from acclaimed home-cooking expert and #1 New York Times bestselling author Mark Bittman, is now completely revised and includes gorgeous color photos.

The secret to cooking fast is cooking smart—choosing and preparing ingredients that make the most of your time in the kitchen. In this new edition of How to Cook Everything Fast, Mark Bittman shares hundreds of simple, flavorful dishes—each ready in 30 minutes or less. But “fast” doesn’t mean compromising on quality or resorting to packaged shortcuts; instead, Bittman offers savvy hacks—broiling rather than baking, using less liquid for a faster boil, and taking advantage of downtime for last-minute prep.

In the spirit of fast and simple cooking, recipes have been retested and streamlined for this completely revised edition—which now also features dozens of vegan and vegetarian options and stunning all-new photography. New favorites include Chickpea Hash with Tahini Sauce, Gooey Stovetop Lasagna, Peanut Noodles with Whatever You Have, Caramelized Bananas, and so many more. Variations, tips, quick side dishes, make-ahead components, and kitchen insights abound.

The results are innovative, easy-to-follow recipes for the food you want to eat today and new strategies for becoming a faster—and-better—cook every time you use the book.