Break Through: Why We Can't Leave Saving the Planet to Environmentalists (Paperback) 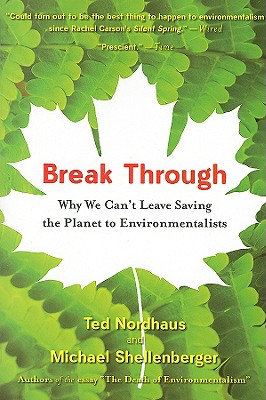 Break Through: Why We Can't Leave Saving the Planet to Environmentalists (Paperback)


Not On Our Shelves—Ships in 1-5 Days
Current tactics can’t solve today’s complex global crises. The “bad boys of environmentalism” call for a bold and empowering new vision

Environmental insiders Michael Shellenberger and Ted Nordhaus triggered a firestorm of controversy with their self-published essay “The Death of Environmentalism,” which argued that environmentalism cannot deal with global warming and should die so that a new politics can be born. Global warming is far more complex than past pollution problems, and American values have changed dramatically since the movement’s greatest victories in the 1960s, but environmentalists keep fighting the same old battles. Seeing a connection between the failures of environmentalism and the failures of the entire left-leaning political agenda, the authors point the way toward an aspirational politics that will resonate with modern American values and be capable of tackling our most pressing challenges.

In this eagerly awaited follow-up to the original essay, the authors give us an expansive and eloquent manifesto for political change. What Americans really want, and what could serve as the basis for a new politics, is a vision capable of inspiring us to greatness. Making the case for abandoning old categories (nature/market, left/right), the authors articulate a pragmatism fit for our times that has already found champions in such prominent figures as Hillary Clinton and Barack Obama.

This book will hit the same nerve as What’s the Matter with Kansas and Don’t Think of an Elephant. But its analysis will reshape American politics for decades to come.

"BREAK THROUGH helps to structure a much needed political dialogue of possibility.” - Richard Florida, Rise of the Creative Class

“BREAK THROUGH illuminates a new and empowering politics for America.” — Ross Gelbspan, "The Heat Is On" and "Boiling Point"

"A bracing manifesto sure to launch a debate long overdue in the environmental movement.” — Michael Pollan, "The Omnivore’s Dilemma"

“BREAK THROUGH is a must-read.” — Ariel Levy, author of "Female Chauvinist Pigs"

"BREAK THROUGH is a provacative case against an erstwhile declaration of defeat." - Seed Magazine

"Could turn out to be the best thing to happen to environmentalism since Rachel Carson's ‘Silent Spring.’" - Wired Magazine

"BREAK THROUGH is a provocative case against an erstwhile declaration of defeat." -Seed Magazine