The Caliph's House: A Year in Casablanca (Paperback) 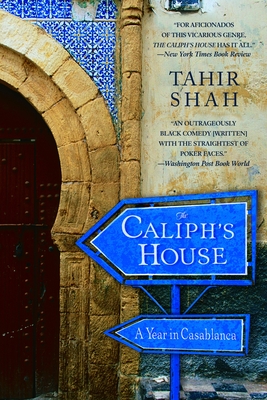 The Caliph's House: A Year in Casablanca (Paperback)


In Stock—Click for Locations
In the tradition of A Year in Provence and Under the Tuscan Sun, acclaimed English travel writer Tahir Shah shares a highly entertaining account of making an exotic dream come true. By turns hilarious and harrowing, here is the story of his family’s move from the gray skies of London to the sun-drenched city of Casablanca, where Islamic tradition and African folklore converge–and nothing is as easy as it seems….

Inspired by the Moroccan vacations of his childhood, Tahir Shah dreamed of making a home in that astonishing country. At age thirty-six he got his chance. Investing what money he and his wife, Rachana, had, Tahir packed up his growing family and bought Dar Khalifa, a crumbling ruin of a mansion by the sea in Casablanca that once belonged to the city’s caliph, or spiritual leader.

With its lush grounds, cool, secluded courtyards, and relaxed pace, life at Dar Khalifa seems sure to fulfill Tahir’s fantasy–until he discovers that in many ways he is farther from home than he imagined. For in Morocco an empty house is thought to attract jinns, invisible spirits unique to the Islamic world. The ardent belief in their presence greatly hampers sleep and renovation plans, but that is just the beginning. From elaborate exorcism rituals involving sacrificial goats to dealing with gangster neighbors intent on stealing their property, the Shahs must cope with a new culture and all that comes with it.

Endlessly enthralling, The Caliph’s House charts a year in the life of one family who takes a tremendous gamble. As we follow Tahir on his travels throughout the kingdom, from Tangier to Marrakech to the Sahara, we discover a world of fierce contrasts that any true adventurer would be thrilled to call home.
Tahir Shah was born into an Anglo-Afghan family with roots in the mountain stronghold of the Hindu Kush. His ten books have chronicled a series of fabulous journeys. He lives with his wife and two children in Casablanca.
"Tahir Shah's highly readable account of moving his young family to Casablanca is.... an outrageously black comedy [written] with the straightest of poker faces."—The Washington Post Book Review

"A wonderfully entertaining book - Tahir Shah's talent is to make you
laugh while you are admiring the insights given by his most original
and lively view of life."—Doris Lessing

"Reminiscent of Peter Mayle's A Year in Provence."—Entertainment Weekly