Conquistador: Hernan Cortes, King Montezuma, and the Last Stand of the Aztecs (Paperback) 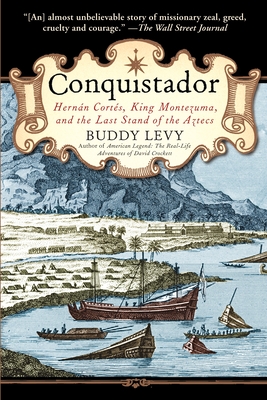 Conquistador: Hernan Cortes, King Montezuma, and the Last Stand of the Aztecs (Paperback)


Special Order—Subject to Availability
In this astonishing work of scholarship that reads like an edge-of-your-seat adventure thriller, acclaimed historian Buddy Levy records the last days of the Aztec empire and the two men at the center of an epic clash of cultures perhaps unequaled to this day.

It was a moment unique in human history, the face-to-face meeting between two men from civilizations a world apart. In 1519, Hernán Cortés arrived on the shores of Mexico, determined not only to expand the Spanish empire but to convert the natives to Catholicism and carry off a fortune in gold. That he saw nothing paradoxical in carrying out his intentions by virtually annihilating a proud and accomplished native people is one of the most remarkable and tragic aspects of this unforgettable story. In Tenochtitlán Cortés met his Aztec counterpart, Montezuma: king, divinity, commander of the most powerful military machine in the Americas and ruler of a city whose splendor equaled anything in Europe. Yet in less than two years, Cortés defeated the entire Aztec nation in one of the most astounding battles ever waged. The story of a lost kingdom, a relentless conqueror, and a doomed warrior, Conquistador is history at its most riveting.
Buddy Levy is the author of the recent books No Barriers: A Blind Man’s Journey to Kayak the Grand Canyon (with Erik Weihenmeyer), Geronimo: Leadership Strategies of an American Warrior (with Mike Leach), and River of Darkness: Francisco Orellana’s Legendary Voyage of Death and Discovery Down the Amazon. His other books include Conquistador: Hernán Cortés, King Montezuma, and the Last Stand of the Aztecs, which was a finalist for the 2009 Pacific Northwest Booksellers Association Award and nominated for the 2009 Before Columbus Foundation American Book Award and a 2009 PEN Center USA Award, American Legend: The Real-Life Adventures of David Crockett, and Echoes on Rimrock: In Pursuit of the Chukar Partridge. His books have been published in six languages.

As a freelance journalist, he has covered adventure sports and lifestyle/travel subjects around the world, including several Eco-Challenges and other adventure expeditions in Argentina, Borneo, Europe, Greenland, Morocco, and the Philippines. His magazine articles and essays have appeared in Alaska Beyond, Backpacker, Big Sky Journal, Couloir, Discover, High Desert Journal, Poets & Writers, River Teeth, Ski, Trail Runner, Utne Reader, TV Guide, and VIA. He is clinical associate professor of English at Washington State University, and lives in northern Idaho.
"For sheer drama, no age compares to the age of exploration, no explorers compare to the conquistadors and no conquistador compares to Hernan Cortes. In Buddy Levy’s finely wrought and definitive Conquistador, the worlds of Cortes and Montezuma collide and come to life. Five hundred years after the conquest, the Cadillo and his prey have been made human. To read Conquistador is to see, hear and feel two cultures in a struggle to the death with nothing less than the fate of the western hemisphere at stake. Prodigiously researched and stirringly told, Conquistador is a rarity: an invaluable history lesson that also happens to be a page-turning read."—Jeremy Schaap, best-selling author of Cinderella Man: James J. Braddock, Max Baer and the Greatest Upset in Boxing History, and Triumph: The Untold Story of Jesse Owens and Hitler’s Olympics

"A century before the Mayflower, a single man settled the destiny of the Americas far more momentously than the Puritans ever could....Conquistador offers a fascinating account of the first and most decisive of those encounters: the one between the impetuous Spanish adventurer Cortés and Montezuma, the ill-starred emperor of the Aztecs.... [An] almost unbelievable story of missionary zeal, greed, cruelty and courage."—Wall Street Journal

“A fateful meeting of civilizations…. Cortes is front and center in this book…. [Levy’s] description of the final siege on Tenochtitlan is especially dramatic.”—Associated Press

“Explores just how far invaders will go to take what they want.”–Cape Cod Times