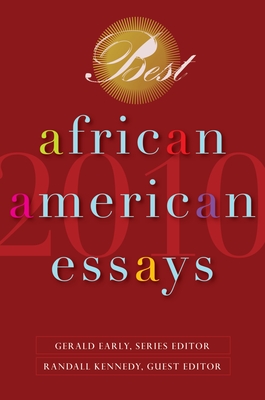 
Special Order—Subject to Availability
Here is the superb second edition of the annual anthology devoted to the best nonfiction writing by African American authors—provocative works from an unprecedented and unforgettable year when truth was stranger (and more inspiring) than fiction.

The galvanizing election of Barack Obama was on the minds—and the pages—of authors everywhere. Best African American Essays 2010 features the insights of writers from Juan Williams to Kelefa Sanneh and even Obama himself (his seminal speech on race is included here in its entirety). Ta-Nehisi Coates, in The Nation, proclaims that the president has "redefined blackness for white America," while Adolph Reed, Jr., in The Progressive, calls him a "vacuous opportunist" and Colson Whitehead, in The New York Times, lightheartedly revels in the election of "someone who looked like me . . . slim." The First Lady is considered, too, as Lauren Collins, in The New Yorker, assesses the radical quality of Michelle Obama's very normalcy.

But Best African American Essays 2010 goes beyond the Obamas with brilliant pieces from such writers as Hua Hsu, who declares the end of white America in "a new cultural mainstream which prizes diversity above all else"; Henry Louis Gates, who researches his family tree, adding to the "young discipline" that is African American history; and Jelani Cobb, who dares to defend George W. Bush. There are thoughtful and heartfelt tributes to living legends, including Bill Cosby (and an analysis of his famous "pound cake" speech, which promoted black responsibility, empowerment, and self-esteem), and remembrances of those who have passed, including Miriam Makeba, Isaac Hayes, Eartha Kitt, and Michael Jackson.

Selected by guest editor Randall Kennedy, a leading intellectual and legal scholar, the wide-ranging pieces in Best African American Essays 2010 comprise a thrilling collection that anyone who wishes to understand the meaning of the new America must own.
Gerald Early, a noted essayist and cultural critic, is a professor of English, African, and African American Studies and American Culture Studies at Washington University in St. Louis. He is the author of several books, including The Culture of Bruising, which won the 1994 National Book Critics Circle Award for criticism.