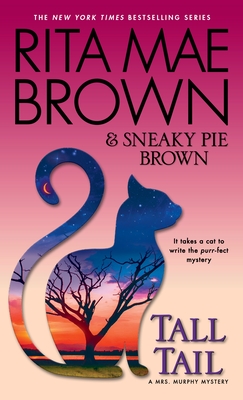 This is book number 25 in the Mrs. Murphy series.

In this fast-paced mystery by Rita Mae Brown and her feline co-author Sneaky Pie Brown, Mary Minor “Harry” Haristeen and her animal friends seek to solve a whodunit rooted in eighteenth-century Virginia—uncovering a shocking secret that refuses to stay buried.

At any moment a perfect summer day in Crozet, Virginia—nestled within the Blue Ridge Mountains—might turn stormy and tempestuous, as Harry knows too well when a squall suddenly sweeps in. In a blink, Harry’s pickup nearly collides with a careening red car that then swerves into a ditch. Harry recognizes the dead driver slumped over the vehicle’s steering wheel: Barbara Leader was nurse and confidante to former Virginia governor Sam Holloway.

Though Barbara’s death is ruled a heart attack, dissenting opinions abound. After all, she was the picture of health, which gives Harry and her four-legged companions pause. A baffling break-in at a local business leads Harry to further suspect that a person with malevolent intent lurks just out of sight: Something evil is afoot.

As it happens, Barbara died in the shadow of the local cemetery’s statue of the Avenging Angel. Just below that imposing funereal monument lie the remains of one Francisco Selisse, brutally murdered in 1784. Harry’s present-day sleuthing draws her back to Virginia’s slave-holding past and the hunt for Selisse’s killer. Now it’s up to Harry and her furry detectives—Mrs. Murphy, Pewter, and Tee Tucker—to expose the bitter truth, even if it means staring into the unforgiving eyes of history and cornering a callous killer poised to pounce.

“Brown [is] the queen of the talking animal cozy.”—Publishers Weekly
Rita Mae Brown is the bestselling author of the Sneaky Pie Brown series; the Sister Jane series; the Runnymede books, including Six of One and Cakewalk; A Nose for Justice and Murder Unleashed; Rubyfruit Jungle; and In Her Day, as well as several other novels. An Emmy-nominated screenwriter and a poet, Brown lives in Afton, Virginia.

“Brown [is] the queen of the talking animal cozy.”—Publishers Weekly