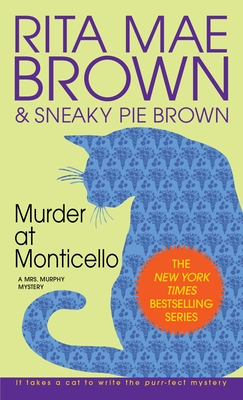 This is book number 3 in the Mrs. Murphy series.

Mrs. Murphy digs into Virginia history—and gets her paws on a killer.

The most popular citizen of Virginia has been dead for nearly 170 years. That hasn't stopped the good people of tiny Crozet, Virginia, from taking pride in every aspect of Thomas Jefferson's life. But when an archaeological dig of the slave quarters at Jefferson's home, Monticello, uncovers a shocking secret, emotions in Crozet run high—dangerously high.

The stunning discovery at Monticello hints a hidden passions and age-old scandals. As postmistress Mary Minor "Harry" Haristeen and some of Crozet's Very Best People try to learn the identity of a centuries-old skeleton—and the reason behind the murder—Harry's tiger cat, Mrs. Murphy, and her canine and feline friends attempt to sniff out a modern-day killer. Mrs. Murphy and corgi Tee Tucker will stick their paws into the darker mysteries of human nature to solve murders old and new—before curiosity can kill the cat—and Harry Haristeen.
Rita Mae Brown is the bestselling author of several books. An Emmy-nominated screenwriter and a poet, she lives in Afton, Virginia.

Sneaky Pie Brown, a tiger cat born somewhere in Albemarle County, Virginia, was discovered by Rita Mae Brown at her local SPCA. They have collaborated on fourteen previous Mrs. Murphy mysteries: Sour Puss; Wish You Were Here; Rest in Pieces; Murder at Monticello; Pay Dirt; Murder, She Meowed; Murder on the Prowl; Cat on the Scent; Pawing Through the Past; Claws and Effect; Catch as Cat Can; The Tail of the Tip-Off; Whisker of Evil; and Cat’s Eyewitness, in addition to Sneaky Pie’s Cookbook for Mystery Lovers.
***12 "You don't have to be a cat lover to love Murder at Monticello."—Indianapolis Star