Catch as Cat Can: A Mrs. Murphy Mystery (Mass Market) 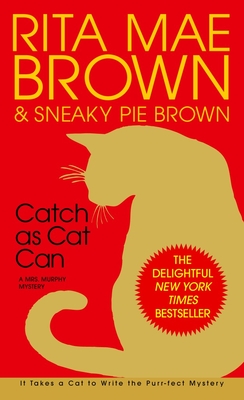 Catch as Cat Can: A Mrs. Murphy Mystery (Mass Market)

This is book number 10 in the Mrs. Murphy series.

As for tiger cat Mrs. Murphy, feline intuition tells her there’s more in the air than just pheromones. It begins with a case of stolen hubcaps and proceeds to the mysterious death of a dissolute young mechanic over a sobering cup of coffee. Then another death and a shooting lead to the discovery of a half-million crisp, clean dollar bills that look to be very dirty.

Now Harry is on the trail of a cold-blooded murderer. Mrs. Murphy already knows who it is--and who’s next in line. She also knows that Harry, curious as a cat, does not have nine lives. And the one she does have is hanging by the thinnest of threads.
Rita Mae Brown is the bestselling author of the Sneaky Pie Brown series; the Sister Jane series; A Nose for Justice and Murder Unleashed; Rubyfruit Jungle; In Her Day; and Six of One, as well as several other novels. An Emmy-nominated screenwriter and a poet, Brown lives in Afton, Virginia.

“Mrs. Murphy is [a] cat who detects her way into our hearts.”—San Francisco Chronicle Book Review