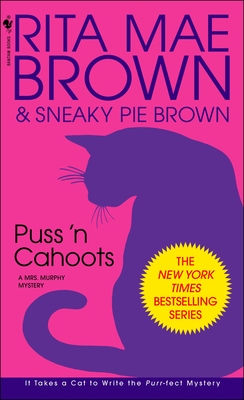 This is book number 15 in the Mrs. Murphy series.

Instead of a proper second honeymoon, the newly remarried Harry and Fair Haristeen leave cozy Crozet, Virginia, for Shelbyville, Kentucky, site of the famous saddlebred horse show. There they’ll visit dear friends Joan Hamilton and Larry Hodge and enjoy a week among some of the finest horses, trainers, and riders in the country.

But soon after they arrive, events veer mysteriously–and murderously–off course. First, Joan’s ruby and sapphire horsehead heirloom pin is stolen from her private box at the fairgrounds. Next, a young film star’s prize three-gaited mare disappears into thin air. There is no lack of suspects, from hotheaded trainers and jealous rivals to vicious ex-spouses. Then a body is found flagrantly murdered and it’s obvious to Harry that someone at Shelbyville is sending a strong message: winning is only secondary–first prize is survival.

As Harry searches for clues, rediscovers life as a married woman, and deals with her upcoming fortieth birthday, her four-legged detective friends are already on the case. But is animal instinct any match for human depravity? Especially with two humans to protect and a killer on the prowl?
Rita Mae Brown is the bestselling author of the Sneaky Pie Brown series; the Sister Jane series; A Nose for Justice and Murder Unleashed; Rubyfruit Jungle; In Her Day; and Six of One, as well as several other novels. An Emmy-nominated screenwriter and a poet, Brown lives in Afton, Virginia.