The Temple in Text and Tradition: A Festschrift in Honour of Robert Hayward (Library of Second Temple Studies #83) (Hardcover) 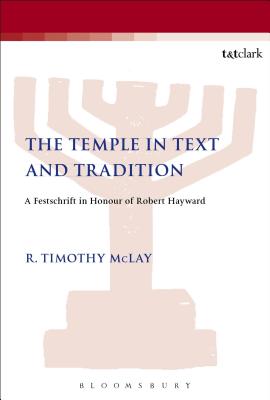 The Temple in Text and Tradition: A Festschrift in Honour of Robert Hayward (Library of Second Temple Studies #83) (Hardcover)

The Second Temple period is an era that marked a virtual explosion in the world of literature, with the creation, redaction, interpretation, and transmission of Jewish texts that represented diverse languages and ideologies. The creation of many of these writings coincided with the growth of the Jewish community beyond the borders of Israel; therefore, among those for whom the Temple played a diminishing role. The transition period from Temple to texts was accompanied by conflicting interpretations about the role of the Temple as well as diverse theological understandings about God and the Jewish people.

Drawing on the expertise of leading specialists in Second Temple Judaism, Temple, Texts, and Traditions explores the rich traditions of the Jewish people as they were expressed and interpreted in their writings in that period, which included writings that later became recognized as Scriptures.
R. Timothy McLay is an independent scholar currently residing in Toronto, Canada. He has served as Associate Professor of Religious Studies, Languages, and Ministry Studies at St. Stephen's University, New Brunswick, Canada. He earned his B.A. at Atlantic Baptist University, Canada, M.Div. at Acadia Divinity College, Canada, and Ph.D. at Durham, UK.