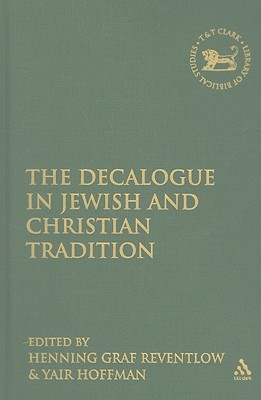 This is book number 509 in the Library of Hebrew Bible/Old Testament Studies series.

This collection of papers arrives from the eighth annual symposium between the Chaim Rosenberg School of Jewish Studies of Tel Aviv University and the Faculty of Protestant Theology of the University of Ruhr, Bochum held in Bochum, June 2007. The general theme of the Decalogue was examined in its various uses by both Jewish and Christian traditions throughout the centuries to the present. Three papers deal with the origin of the Decalogue: Yair Hoffman on the rare mentioning of the Decalogue in the Hebrew Bible outside the Torah; E. L. Greenstein considers that already A. ibn Ezra doubted that God himself spoke in the Ten Commandments and states that more likely their rhetoric indicates it was Moses who proclaimed the Decalogue; A. Bar-Tour speaks about the cognitive aspects of the Decalogue revelation story and its frame. The second part considers the later use of the Decalogue: G. Nebe describes its use with Paul; P. Wick discusses the symbolic radicalization of two commandments in James and the Sermon on the Mount; A. Oppenheimer explains the removal of the Decalogue from the daily Shem'a prayer as a measure against the minim's claim of a higher religious importance of the Decalogue compared to the Torah; W. Geerlings examines Augustine's quotations of the Decalogue; H. Reventlow depicts its central place in Luther's catechisms; Y. Yacobson discusses its role with Hasidism. The symposium closes with papers on systematic themes: C. Frey follows a possible way to legal universalism; G. Thomas describes the Decalogue as an "Ethics of Risk"; F. H. Beyer/M. Waltemathe seek an educational perspective.
H. Graf Reventlow, was an Emeritus Professor of Old Testament at University of the Ruhr, Bochum. His most important recent publication is the book series Epochen der Bibelauslegung (4 vol.). English translation in preparation.

Y. Hoffman is an Emeritus Professor of Bible at Tel-Aviv University. He has published books on various biblical topics such as: of the Exodus; Prophecies Against Foreign nations; The book of Job; recently he has published a 2 volumes' commentary on the Book of Jeremiah.