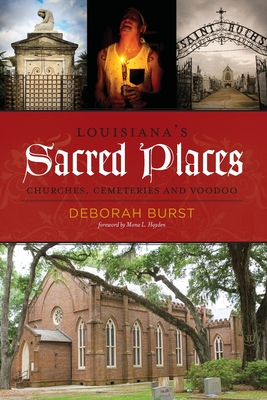 This is book number 2 in the Sacred Places series.

Louisiana's Sacred Places blurs the lines between the sacred and the profane. Author Deborah Burst combines her love for art, history and architecture into a poetic trail of churches, cemeteries and Voodoo ceremonies.

Explore Louisiana's most solemn and revered locals, from New Orleans' most telling portraits of eternal architecture to St. Roch Chapel's chamber of miracles with relics of pain and suffering. Burst brings readers inside Voodoo ceremonies with vivid photography and a detailed history of the religion with interviews from New Orleans' own Voodoo priestess, Sallie Ann Glassman.

Moving north along the cypress bayous learn the mysteries of the Creole tradition in lighting the graves on All Saints Day. Follow the trail west along the muddy Mississippi where country chapels whisper tales of survival against the river's mighty floods. Inside the Feliciana Parishes, 19th century mansions are rife with tales of Civil War casualties laid to rest under the scenic weeping oaks. Burst ends the book with some dark humor in how New Orleans celebrates its dead with jazz funerals and post-mortem parties fit for a king.

The book features 57 of Burst's stellar photos, some full page, along with travel notes at the end of each chapter. The convenient 6x9 format is perfect for car, purse or backpack.

"Delightfully vivid bringing to life all the favorite haunts of the lively spirits both living and dead." Anne Rice, lauded author of gothic fiction, Christian literature, and best known for The Vampire Chronicles featuring Lestat

"I personally believe we bury our dead above ground because it's easier for them to get out at night and walk around the city. In her book, Deborah has captured the true essence of the Voodoo religion and the soul of New Orleans." Sallie Ann Glassman, Voodoo Priestess of New Orleans and author of "Vodou Visions, An Encounter with Divine Mystery."