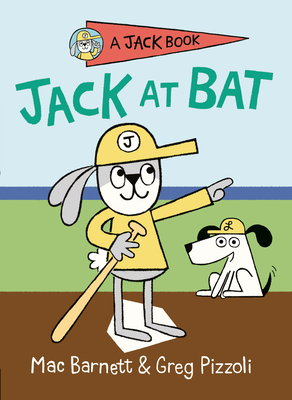 This is book number 3 in the A Jack Book series.

The Lady and Rex have a baseball game against the Big City Brats. Jack is not allowed to swing the bat, so he is told to be the Bat Boy. That is, until the Lady Town Ladies and the Big City Brats are tied. It's up to Jack to hit a home run, but on the way to home plate he spots some snacks . . .

Welcome to the laugh-out-loud and irreverent world of Jack, a new early reader series by the New York Times bestselling and award-winning team of Mac Barnett and Greg Pizzoli.
Mac Barnett is the New York Times bestselling author of more than forty books, including Sam and Dave Dig a Hole, Extra Yarn, and the Mac B., Kid Spy series. His books have won numerous prizes, including three E.B. White Read-Aloud Awards, two Caldecott Honors, and the Boston Globe-Horn Book Award. Mac lives in Oakland, California.

Greg Pizzoli is an author, illustrator, and printmaker. His first picture book, The Watermelon Seed, won the Theodor Seuss Geisel Award, and his book Good Night Owl was a Geisel Honor Book. His Viking nonfiction picture book Tricky Vic was a New York Times Best Illustrated Book of 2015. He lives in Philadelphia.
★ “Barnett works wonders with a limited vocabulary, packing the stories with humor, tension—and admonishments of Jack. Pizzoli’s scruffy-edged, emotive cartoons are just as funny, and he carries the comedy into drawing lessons and closing endpapers.” –Publishers Weekly, starred review

★ "Jack is a rule-proof bundle of bunny-eared id who does as he pleases, and therein lies his considerable charm.” –BCCB, starred review