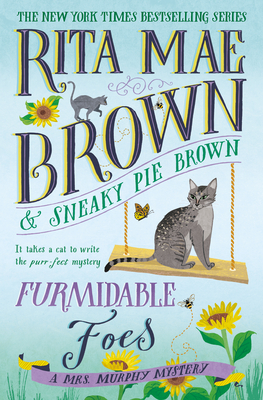 This is book number 29 in the Mrs. Murphy series.

Mary Minor “Harry” Harristeen is on the hunt for a killer with a deadly green thumb when a day in the garden turns fatal in this exciting new mystery from Rita Mae Brown and her feline co-author Sneaky Pie Brown.

Spring arrives in northern Virginia, and as the ground thaws and the peonies begin to bloom a bright magenta, the women of St. Luke’s Lutheran Church prepare for a Homecoming celebration like no other. Harry, Susan Tucker, and their friends are busy planting flowers and trimming hedges to get the church grounds in shape for the big day.

But a note of a menace mars the beautiful spring: The brewery owned by Janice Childs and Mags Nielsen, two members of the gardening committee, gets robbed, with hundreds of dollars in merchandise taken off their delivery trucks in the dead of night. Is this the work of a random thief? Or is something more sinister afoot?

When Jeannie Cordle drops dead at a charity auction, poisoned by a fatal weed, Harry’s worst suspicions are confirmed: a killer lurks in their midst, one with a keen understanding of poisonous plants. Although she can’t yet prove it, Harry knows the murder is related to the thefts at Bottom’s Up Brewery.

With help from her feline sidekicks, Mrs. Murphy and Pewter, as well as Tee Tucker the corgi and sweet puppy Pirate, Harry sets out to find the weed in St. Luke’s garden—and stop a killer before they can strike again.
Rita Mae Brown is the bestselling author of the Sneaky Pie Brown mysteries; the Sister Jane series; the Runnymede novels, including Six of One and Cakewalk; A Nose for Justice and Murder Unleashed; Rubyfruit Jungle; and In Her Day; as well as many other books. An Emmy-nominated screenwriter and a poet, Brown lives in Afton, Virginia, and is a Master of Foxhounds and the huntsman.