Paradise: One Town's Struggle to Survive an American Wildfire (Hardcover) 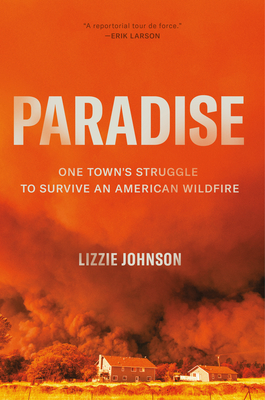 Paradise: One Town's Struggle to Survive an American Wildfire (Hardcover)


Not On Our Shelves—Ships in 1-5 Days
The definitive firsthand account of California’s Camp Fire, the nation’s deadliest wildfire in a century, Paradise is a riveting examination of what went wrong and how to avert future tragedies as the climate crisis unfolds.

“A tour de force story of wildfire and a terrifying look at what lies ahead.”—San Francisco Chronicle (Best Books of the Year)

On November 8, 2018, the people of Paradise, California, awoke to a mottled gray sky and gusty winds. Soon the Camp Fire was upon them, gobbling an acre a second. Less than two hours after the fire ignited, the town was engulfed in flames, the residents trapped in their homes and cars. By the next morning, eighty-five people were dead.

As a reporter for the San Francisco Chronicle, Lizzie Johnson was there as the town of Paradise burned. She saw the smoldering rubble of a historic covered bridge and the beloved Black Bear Diner and she stayed long afterward, visiting shelters, hotels, and makeshift camps. Drawing on years of on-the-ground reporting and reams of public records, including 911 calls and testimony from a grand jury investigation, Johnson provides a minute-by-minute account of the Camp Fire, following residents and first responders as they fight to save themselves and their town. We see a young mother fleeing with her newborn; a school bus full of children in search of an escape route; and a group of paramedics, patients, and nurses trapped in a cul-de-sac, fending off the fire with rakes and hoses.

In Paradise, Johnson documents the unfolding tragedy with empathy and nuance. But she also investigates the root causes, from runaway climate change to a deeply flawed alert system to Pacific Gas and Electric’s decades-long neglect of critical infrastructure. A cautionary tale for a new era of megafires, Paradise is the gripping story of a town wiped off the map and the determination of its people to rise again.
Lizzie Johnson is a staff writer at the Washington Post. Previously, she worked at the San Francisco Chronicle, where she reported on fifteen of the deadliest, largest, and most destructive blazes in modern California history, and covered over thirty communities impacted by wildfires. Originally from Nebraska, she lived part-time in Paradise while reporting this book and currently lives in Washington, DC.
“A vivid ticktock account of the disaster, told through the stories of those who experienced it.”—The New York Times

“In this reportorial tour de force, Lizzie Johnson captures the orange-black hell of the Paradise wildfire in wrenching, skin-singeing detail. You can smell the smoke, feel the super-heated air. After reading this book I wanted to clear all brush and trees away from my home—and I live in Manhattan.”—Erik Larson, author of The Splendid and the Vile

“Paradise is a phenomenal piece of reporting, filled with love and loss, valor and terror. Lizzie Johnson has written the definitive account of an American tragedy.”—Elizabeth Kolbert, author of The Sixth Extinction

“Immediate and emotionally devastating . . . Johnson works to balance the imperative of narrative tension with respect for the unimaginable tragedy, and the resulting work is worth the emotional toll of reading it.”—Los Angeles Times

“A masterful feat of reporting and climate-era storytelling. [Johnson] has taken the story of a rough-hewn town of retirees and Trumpers, population 27,000 (pre-fire), and turned it into a parable of suffering and loss, of love and heroism.”—Rolling Stone

“Paradise delves so deep into the experiences of every character that we see the fire through their eyes. . . . That’s the true feat of Johnson’s meticulous account: she humanizes a tragedy that is otherwise too big to fathom. . . . More than just a portrait of destruction, this book is a small act of restoration.”—Outside

“Writers seek intimacy to get readers to care about their subjects when disaster strikes. That tactic works here, yet it does more. Johnson’s kaleidoscope of biographical snapshots creates a twenty-first-century version of Sherwood Anderson’s 1919 novel, Winesburg, Ohio.”—The Washington Post

“Riveting . . . Paradise does what good journalism is supposed to do: It bears witness, in sharp, moving detail, to what happened.”—BuzzFeed News

“Johnson does for California’s deadliest wildfire what Sheri Fink did for Hurricane Katrina in Five Days at Memorial. . . . The book is unmatched for the depth, breadth, and quality of its reporting on a major twenty-first-century wildfire, and it’s likely to become the definitive account of the catastrophe in Paradise.”—Kirkus Reviews (starred review)

“A viscerally harrowing, almost minute-by-minute narrative . . . [Johnson] humanizes the book with detailed, sensitively told stories of many of the townspeople.”—Booklist (starred review)

“Paradise is a propulsive, compassionate tale of lives forever altered and the lessons we must learn about our rapidly changing planet.”—Robert Kolker, author of Hidden Valley Road

“In the tradition of disaster-reporting classics like 102 Minutes and Five Days at Memorial, Paradise delivers everything you expect from the best narrative nonfiction: on-the-ground reporting, incisive writing, and thoughtful analysis. . . . A masterful achievement.”—Nate Blakeslee, author of American Wolf