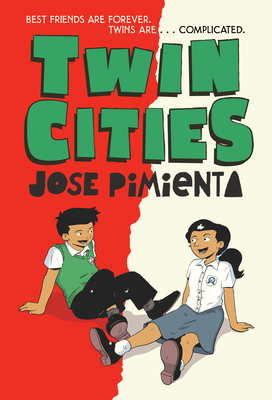 
Not On Our Shelves—Ships in 1-5 Days
FOUR STARRED REVIEWS • A critically acclaimed graphic novel with rave reviews about this timely story featuring middle school twins living on the Mexico-US border and trying to discover exactly who they are – together or apart.

Being twins means having a best friend forever . . . But when one goes to middle school in Mexico and the other across the border in California, can that bond withstand the distance? Luis Fernando is staying local in Mexicali, Mexico, while Luisa Teresa crosses the border every day so she can go to a private school in Calexico, California. As they try to embrace new experiences close to and far from home, the twins hit obstacles: like making new friends and navigating school pressure without the other one for support.  Fernando and Teresa finally have the chance to stand on their . . . isn’t that what the always wanted?

A unique and timely story about siblings, middle school, and peer pressure from rising star Jose Pimienta, Twin Cities is at once a relatable contemporary story and much-needed window into an experience so many kids can relate to but has rarely been seen in children’s graphic novels.

"From start to finish, Twin Cities is a superbly crafted work of art and emotion that marks Pimienta as a creator to watch." —BookPage, starred review
Jose Pimiento was raised in Mexicali, Baja California and now resides in Los Angeles, CA where they work on comics and storyboards for animation and film. Suncatcher was their debut author/illustrator graphic novel. Twin Cities is their first middle-grade graphic novel. In their stories, they focus on the importance of Latinx culture and the experience of growing up on the border.

★ "From start to finish, Twin Cities is a superbly crafted work of art and emotion that marks Pimienta as a creator to watch." —BookPage, starred review

★ "Brightly colored, intricately detailed panoramas and montages convey one family’s experience living in a vivacious border community that is richer for its multitude of influences." —Publishers Weekly, starred review

★ "This graphic novel explores the relationship between young teenage twins as they traverse physical, personal, and cultural borders." —The Horn Book, starred review