Me and the Boss: A Story About Mending and Love (Hardcover) 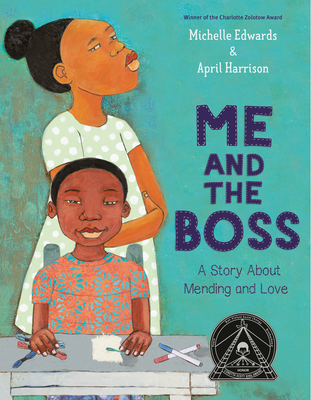 Me and the Boss: A Story About Mending and Love (Hardcover)


On Our Shelves Now at:
All the highs and lows of having a bossy, protective, and loving older sibling are depicted in this heartwarming picture book by a critically acclaimed author and award-winning illustrator.  Meet Lee, a little boy who won't give up until he learns how to sew, and Zora, the sister who watches him try--and ultimately succeed!

"I know big sisters. Zora, the boss, she's mine," explains Lee as he and Zora head to the library, where Mrs. C is teaching the children how to sew. Though Zora sews a beautiful flower on her cloth square, little Lee makes a mess out of the half-moon he is trying to stitch. That night, when he can't sleep, he gives sewing another try...and succeeds, even mending the hole in his pants pocket! The next morning, he sneaks into Zora's room and sews the ear back on Bess, her stuffed bear. When Zora discovers Bess, she wraps Lee in her special big sister hug--for just a moment--and then is back to being the boss once again. An acclaimed author and a Coretta Scott King-John Steptoe Award-winning illustrator create a funny, oh-so-true portrait of a brother and sister’s relationship in this winning picture book.
Michelle Edwards is the author of numerous picture books, including A Hat for Mrs. Goldman, which received four starred reviews and was hailed as "heartwarming" by the New York Times. Her other titles include Chicken Man, winner of the National Jewish Book Award; Max Makes a Cake, illustrated by Charles Santoso; and Room for the Baby, illustrated by Jana Christy. A lifelong knitter, Michelle has also written an adult title, A Knitter's Home Companion. She lives in Iowa City, Iowa. Visit her at michelledwards.com.

"A wonderful read-aloud." —The Horn Book