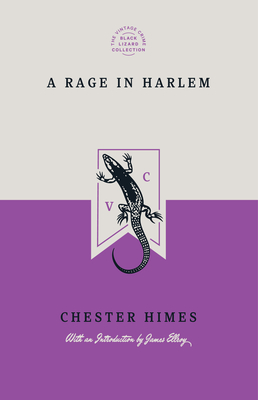 
On Our Shelves Now at:
A special edition of A Rage in Harlem, a ripping introduction to Coffin Ed Johnson and Grave Digger Jones, who patrol New York City’s roughest streets in Chester Himes’s groundbreaking Harlem Detectives series. Featuring an introduction by James Ellroy.

For love of fine, wily Imabelle, hapless Jackson surrenders his life savings to a con man who knows the secret of turning ten-dollar bills into hundreds—and then he steals from his boss, only to lose the stolen money at a craps table. Luckily for him, he can turn to his savvy twin brother, Goldy, who earns a living—disguised as a Sister of Mercy—by selling tickets to Heaven in Harlem. With Goldy on his side, Jackson is ready for payback.

“Himes’s Harlem saga vies with the novels of David Goodis and Jim Thompson as the inescapable achievement of postwar American crime fiction.” —The New York Times

Chester Himes was born in Missouri in 1909. He began writing while serving a prison sentence for a jewel theft and published just short of twenty novels before his death in 1984. Among his best-known thrillers are Blind Man with a Pistol, Cotton Comes to Harlem, The Crazy Kill, A Rage in Harlem, The Real Cool Killers, and The Heat's On, all available from Vintage.

“Himes undertook to do for Harlem what Raymond Chandler did for Los Angeles.”
—Newsweek

“One of the most important American writers of the 20th century. . . . A quirky American genius.”
—Walter Mosley

“Himes’s Harlem saga vies with the novels of David Goodis and Jim Thompson as the inescapable achievement of postwar American crime fiction.”
—The New York Times