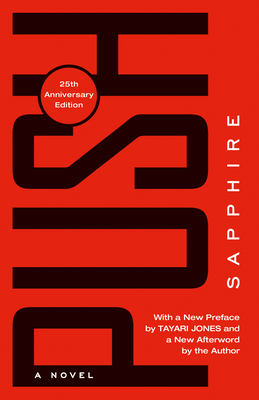 
On Our Shelves Now at:
A new 25th anniversary edition of the instant classic that inspired the major motion picture and Sundance Film Festival winner Precious: Based on the Novel 'PUSH' by Sapphire, whose power and ferocity influenced a generation of writers.

Precious Jones, an illiterate sixteen-year-old, has up until now been invisible to the father who rapes her and the mother who batters her and to the authorities who dismiss her as just one more of Harlem's casualties. But when Precious, pregnant with a second child by her father, meets a determined and radical teacher, we follow her on a journey of education and enlightenment as she learns not only how to write about her life, but how to make it truly her own for the first time.
Sapphire is the author of two books of poetry, American Dreams and Black Wings & Blind Angels, and the New York Times bestselling novel The Kid. She lives and works in New York City.
“Affecting and impassioned . . . sails on the strength of pure, stirring feeling.”
—The New York Times Book Review

“A horrific, hope-filled story [that is] brilliant, blunt, merciless.”
—Newsday