Into the Glades (Hardcover) 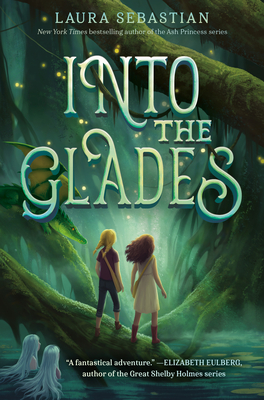 Into the Glades (Hardcover)


On Our Shelves Now at:
New York Times bestselling author Laura Sebastian makes her middle grade debut with an emotional fantasy adventure about four friends who journey through a magical, Everglades-inspired swampland to break a curse tied to the death of a loved one.

Best friends Cordelia and Larkin have always called the Glades—a peaceful swamp full of magical creatures—home. But when Oziris, Cordelia’s father and the leader of their village, dies unexpectedly, a dark curse sweeps over the land.

The girls know that the curse must be tied to Oziris’s death, and they’re determined to break its hold on their home and bring Oziris back to life. Together, Cordelia, Larkin, and their two little brothers set off into the wild Glades in search of an elusive and enigmatic witch who is rumored to have the power to reverse death.

The Glades are no longer a familiar and friendly place, though, and danger lurks around every corner. But on their journey, the children discover that the most difficult challenge isn’t wild marsh-maids or bogilisks or dragon-gators—it’s the grief threatening to consume them.
Laura Sebastian grew up in South Florida and attended Sa­vannah College of Art and Design. She now lives and writes in London with her two dogs, Neville and Circe. Laura is also the author of the New York Times bestselling young adult Ash Princess series and Castles In Their Bones, as well as Half Sick of Shadows, her first novel for adults.

“Heartfelt, original, and engaging, this is a book readers will want to get lost in.”—Katie Tsang, bestselling co-author of the Dragon Realm series

"A fantastical adventure filled with magic, curses, and humor, Into the Glades will sweep readers off their feet, with characters that will imprint into their hearts."—Elizabeth Eulberg, author of The Great Shelby Holmes series

"In her middle grade debut, Laura Sebastian (the Ash Princess series) transports readers with a stunning Everglades-inspired fantasy rooted in friendship and storytelling... Efficient worldbuilding and well-developed characters make for an immersive telling that compassionately considers themes of grief and change, culminating in a compulsively readable narrative."—Publishers Weekly

"Sparkling... with poignant messages of friendship, loss, and agency."—Kirkus Reviews