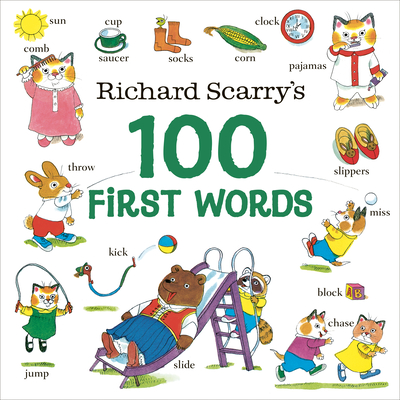 
In Stock—Click for Locations
This Richard Scarry board book introduces babies and toddlers ages zero to three to Busytown friends Lowly Worm and Huckle Cat as well as 100 essential first words!

This super-sturdy casebound board book introduces babies and toddlers ages zero to three to 100 essential first words and to the artwork of Richard Scarry! Illustrated with images of everyday items from Richard Scarry’s most-popular Busytown books, there's something fun to find on every page! Perfect for learning and for play—and also a great way to introduce young children to the friendly characters in Richard Scarry’s Busytown!

Richard Scarry is one of the world's best-loved children's authors EVER! In his extraordinary career, Scarry illustrated over 150 books, many of which have never been out of print. His books have sold over 100 million copies around the world and are currently published in over twenty languages. No other illustrator has shown such a lively interest in the words and concepts of early childhood. Richard Scarry was posthumously awarded a lifetime achievement award from the Society of Illustrators in 2012.