The Absent Moon: A Memoir of a Short Childhood and a Long Depression (Hardcover) 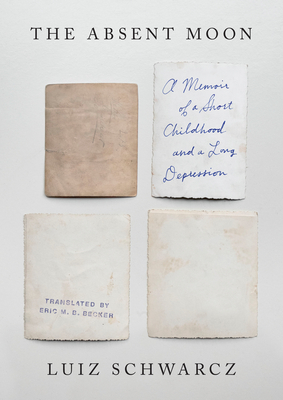 The Absent Moon: A Memoir of a Short Childhood and a Long Depression (Hardcover)

By Luiz Schwarcz, Eric M. B. Becker (Translated by)


Coming Soon—Pre-Order Now
A literary sensation in Brazil, Luiz Schwarcz’s brave and tender memoir interrogates his ordeal of bipolar disorder in the context of a family story of murder, dispossession, and silence—the long echo of the Holocaust across generations

When Luiz Schwarcz was a child, he was told little about his grandfather and namesake, Láios—“Luiz” in Hungarian. Only later in life did he learn that his grandfather, a devout Hungarian Jew, had defied his country’s Nazi occupiers by holding secret religious services in his home. After being put on a train to a German death camp with his son André, Láios ordered André to leap from the train to freedom at a rail crossing, while Láios himself was carried on to his death. What Luiz did know was that his father André, who had emigrated to Brazil, was an unhappy and silent man. Young Luiz assumed responsibility for his parents’ comfort, as many children of trauma do, and for a time he seemed to be succeeding: he blossomed into the family prodigy, eventually growing into a groundbreaking literary publisher in São Paulo. He found a home in the family silence—a home that he filled with books and with reading.

But then, at a high point of outward success, Luiz was brought low by a devastating mental breakdown. The Absent Moon is the story of his journey to that point and of his journey back from it, as Luiz learned to forge a more honest relationship with his own mind, with his family, and with their shared past. The culmination of that path is this extraordinary book, which is beautiful, tragic, noble, piercingly honest, and ultimately redemptive—the product of a lifetime’s reflection, given powerful literary shape in the refiner’s fire by a master storyteller.
Luiz Schwarcz was born in São Paulo, in 1956. He began his career as an editor at Brasiliense and later founded Companhia das Letras, in 1986. In 2017, he received the London Book Fair Lifetime Achievement Award. He is the author of the children’s books Minha vida de goleiro (1999) and Em busca do Thesouro da Juventude (2003), and the short-stories collections Discurso sobre o capim (2005) and Linguagem de sinais (2010).
“A Brazilian writer and publisher memorably chronicles his Jewish upbringing in São Paulo as an only child plagued by depression. In this beautifully composed narrative, Schwarcz investigates the undigested trauma from his postwar childhood, a time shadowed by the long-lasting guilt and depression of his Hungarian Jewish father, András . . . ‘For years now I’ve been living in a world of few words, in an ambiguous silence,’ he writes. ‘It can be as soothing as it is oppressive and addictive. In this vacuum, my manias create alternate realities, always much more imaginary than concrete.’ Imaginary or not, these stories will resonate with anyone dealing with depression, anxiety, mental illness, and/or generational trauma. A riveting literary memoir.” —Kirkus Reviews (starred review)

“In this intimate and profound description of a life often marked by depression, Luiz Schwarcz touches on the insidious power of intergenerational trauma; on the terrible challenges of functioning despite a crippling disease; and on the burden of carrying a disability in relative silence. His is ultimately a book about identity, about how the author has managed, both despite and because of his depression, to inhabit a good marriage, an excellent career, a lovely family, and, perhaps most crucially, a coherent sense of self. It is written with spare economy, tremendous bravado, and authentic courage. It is generous in spirit, devoid of self-pity, and an authentic literary achievement.” —Andrew Solomon

“This tender and lovely memoir of a child growing up in Brazil in a household whose characters were scarred by the Holocaust is unlike anything I can think of. It is also a lyrical and intimate portrait of the author’s lifelong, harrowing battle with depression.” —Abraham Verghese, author of Cutting for Stone

“A beautiful work that is in turn haunting, touching and redemptive.” —Simon Sebag Montefiore