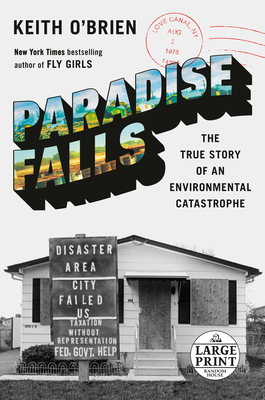 
On Our Shelves Now at:
The staggering story of an unlikely band of mothers in the 1970s who discovered Hooker Chemical's deadly secret of Love Canal—exposing one of America’s most devastating toxic waste disasters and sparking the modern environmental movement as we know it today.

Lois Gibbs, Luella Kenny, and other mothers loved their neighborhood on the east side of Niagara Falls. It had an elementary school, a playground, and rows of affordable homes. But in the spring of 1977, pungent odors began to seep into these little houses, and it didn’t take long for worried mothers to identify the curious scent. It was the sickly sweet smell of chemicals.

In this propulsive work of narrative storytelling, NYT journalist Keith O’Brien uncovers how Gibbs and Kenny exposed the poisonous secrets buried in their neighborhood. The school and playground had been built atop an old canal—Love Canal, it was called—that Hooker Chemical, the city’s largest employer, had quietly filled with twenty thousand tons of toxic waste in the 1940s and 1950s. This waste was now leaching to the surface, causing a public health crisis the likes of which America had never seen before and sparking new and specific fears. Luella Kenny believed the chemicals were making her son sick.

O’Brien braids together previously unknown stories of Hooker Chemical’s deeds; the local newspaperman, scientist, and congressional staffer who tried to help; the city and state officials who didn’t; and the heroic women who stood up to corporate and governmental indifference to save their families and their children. They would take their fight all the way to the top, winning support from the EPA, the White House, and even President Jimmy Carter. By the time it was over, they would capture America’s imagination.

Sweeping and electrifying, Paradise Falls brings to life a defining story from our past, laying bare the dauntless efforts of a few women who—years before Erin Brockovich took up the mantle— fought to rescue their community and their lives from the effects of corporate pollution and laid foundation for the modern environmental movement as we know it today.
KEITH O’BRIEN has written for The New York Times, Politico, and The Boston Globe. A longtime contributor to National Public Radio, he has appeared on All Things Considered, Morning Edition, and This American Life, among other programs. He lives in New Hampshire. Follow him on Twitter @KeithOB.
ANDREW CARNEGIE MEDAL FOR EXCELLENCE NOMINEE

“Propulsive . . . A mighty work of historical journalism . . . Paradise Falls is a glorious quotidian thriller about people forced to find and use their inner strength. After all these years, they are fortunate to have a chronicler as focused and thoughtful as O’Brien. He brings their courage back to life.”
—The Boston Globe

“With stunning clarity . . . [O’Brien chronicles] the human tragedy of Love Canal. . . By the time I read of Jon Allen’s death, even though I knew the outcome, I cried. . . As the disaster unfolds, there are horrific discoveries, medical mysteries and plenty of screaming neighbors . . . so gripping it could almost be a thriller.”
—Erika Engelhaupt, Science News

"Paced like a thriller, it’s a remarkable story of perseverance against impossible odds."
—Chicago Review of Books

“At once heart-wrenching and uplifting, infuriating and inspiring, Paradise Falls is an exhaustively researched and compelling excavation of the past that remains eerily relevant in this moment. O’Brien deftly knits together a tightly-paced, relatable, and definitive narrative of a watershed moment in the annals of environmental justice…and its profoundly felt absence.”
—Denise Kiernan, New York Times bestselling author of We Gather Together, The Last Castle, and The Girls of Atomic City

“Nearly two decades before environmental activist Erin Brockovich made headlines in California, a group of mothers on the other side of the country launched an epic battle to save their neighborhood in the shadow of Niagara Falls. Exhaustively reported and expertly told, Paradise Falls is the definitive, captivating account of the women who, against all odds, exposed the deadly secret of Love Canal. Keith O’Brien’s latest is narrative nonfiction at its finest.”
—Abbott Kahler, bestselling author of The Ghosts of Eden Park

“How does an environmental disaster become an inspiring tale of homemakers turned heroes? Start with Keith O’Brien, a gifted writer who expertly blends emotion and gumshoe reporting to tell the story of ordinary people who fought to save their families. Paradise Falls is a master work of narrative nonfiction.”
—Mitchell Zuckoff, New York Times bestselling author of Fall and Rise and 13 Hours

“This book—about an historical event, an environmental catastrophe—reads like a thriller, even if you know the contours of that event and its outcome. In luminous prose, O’Brien brings people to life on the page. You’ll end up caring about them, and admiring them, for their courage and persistence.”
—Jonathan Harr, author of the #1 national bestseller A Civil Action

“Meticulously researched . . . gripping . . . This authoritative book deserves a wide audience and should provoke reflection on just how much we have progressed in the 45 years since the Love Canal disaster.”
—Library Journal, starred review

“Riveting . . . the text blisters with details . . . Paradise Falls is a narrative resplendent with ordinary people who stood up against overwhelming odds. O’Brien has accomplished an outstanding work of investigative journalism.”
—Booklist, starred review

“Deeply reported, masterly . . . a story [O'Brien] brings to life for a new generation. [Paradise Falls] is a marker we can use to measure how far we’ve come . . . in terms of environmental responsibility, and how far we still have to go.”
—Publishers Weekly

“Deeply researched . . . In this work of investigative reporting, O’Brien narrates a tale of corporate malfeasance and inaction, governmental response (or lack thereof), and, above all, inspiring citizen activism in the face of harrowing circumstances . . . A thorough retelling of an environmental tragedy and a renewed call for corporate accountability.”
—Kirkus Reviews