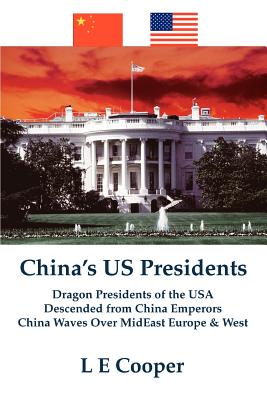 
Not On Our Shelves—Ships in 1-5 Days
(This book cannot be returned.)
Middle Heaven in the US and the West, China and its ancient history goes back to the even earlier royal lines in the Middle East from Egypt-Assyria that brought the idea of Heavenly Ruler on Earth to the 'Middle Kingdom" of the Chinese Emperors who first organized the whole of China into one country. From those emperors of China's Middle Kingdom of Heaven come Holy descents to US Presidents joining Asian History to that of the Americas and the US down to today.

Which US Presidents are descended from Emperors of China?

Will a 'Chinaman" (person of Chinese descent) run the US? How about you? Do you descend from China Emperor? A new understanding of what the West-Europe, US and East-China/Asian global family is. And the underlying China influence throughout the West via looks, genetic memory & culture. A single global family that is a signal/flag/ensign to your understanding of End Times. Sphinx-Pillar.'In that day (End Times) shall there be an altar to the Lord in the midst of the land of Egypt, and a Pillar at the Border thereof to the Lord. And it shall be for a 'sign" unto the Lord of Hosts for a witness unto the Lord of hosts in the land of Egypt; .-Isaiah 19: 19-20. Note the Sphinx & Great Pyramid of the Gaza plateau in Egypt across from the capital of Cairo was always predicted by the Egyptian seers to be the location of the Second Coming. What does the Sphinx & Second Coming have to do with China Author L E Cooper Ensign (@ 20)-descended from Cheops contrasted above c. 2,500 BC to today.