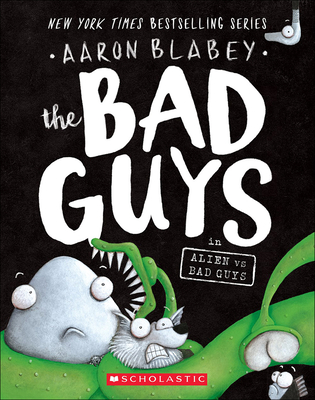 This is book number 6 in the Bad Guys series.

The Bad Guys are vanishing A creature with TONS of teeth and WAY too many butts is stealing them, one by one. Is this the end for the Bad Guys? Maybe. Will it be funny? You bet your butts it will.
Aaron Blabey was an actor before he started creating children's books. In 2008, Pearl Barley and Charlie Parsley was awarded Children's Book Council of Australia's Book of the Year. In 2012, The Ghost of Miss Annabel Spoon was named a White Raven by the International Youth Library, Munich, Germany. It also won the Patricia Wrightson Prize in the 2013 New South Wales Premier's Literary Awards, and the Children's Peace Literature Award, 2013. And now The Bad Guys has won Australia's Children's Indie Book Award for 2016! Aaron lives with his two children and his wife in Sydney, Australia.