The Book of Jewish Values: A Day-by-Day Guide to Ethical Living (Hardcover) 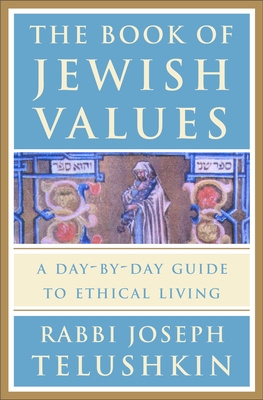 The Book of Jewish Values: A Day-by-Day Guide to Ethical Living (Hardcover)


Not On Our Shelves—Ships in 1-5 Days
Rabbi Joseph Telushkin combed the Bible, the Talmud, and the whole spectrum of Judaism's sacred writings to give us a manual on how to lead a decent, kind, and honest life in a morally complicated world.

"An absolutely superb book: the most practical, most comprehensive guide to Jewish values I know." —Rabbi Harold Kushner, author of When Bad Things Happen to Good People

Telushkin speaks to the major ethical issues of our time, issues that have, of course, been around since the beginning. He offers one or two pages a day of pithy, wise, and easily accessible teachings designed to be put into immediate practice. The range of the book is as broad as life itself:

In addition, Telushkin raises issues with ethical implications that may surprise you, such as the need to tip those whom you don't see (Day 109), the right thing to do when you hear an ambulance siren (Day 1), and why wasting time is a sin (Day 15). Whether he is telling us what Jewish tradition has to say about insider trading or about the relationship between employers and employees, he provides fresh inspiration and clear guidance for every day of our lives.
Rabbi Joseph Telushkin, spiritual leader and scholar, is the author of Jewish Literacy, the most widely read book on Judaism of the past two decades. Another of his books, Words That Hurt, Words That Heal, was the motivating force behind Senators Joseph Lieberman and Connie Mack's 1996 Senate Resolution #151 to establish a "National Speak No Evil Day" throughout the United States. Rabbi Telushkin serves as a senior associate of CLAL, the National Jewish Center for Learning and Leadership, and is the rabbi of the Los Angeles-based Synagogue for the Performing Arts. He lives with his family in New York City and lectures regularly throughout the United States.
"Joseph Telushkin has become America's tutor on all matters Jewish. His particular genius in this book is his capacity to touch the heart and to pull the reader toward goodness. His erudition is evident throughout—yet his uplifting spirit is what stays with you." —Mona Charen, nationally syndicated columnist, Creators Syndicate

"I doubt whether the world has ever been in such dire need of values. Rabbi Joseph Telushkin has drawn the waters of wisdom from the eternal well of Torah for our parched throats. His guide to ethical living should be consulted daily by all who aspire to the dignity of man." —Rabbi Abraham J. Twerski, M.D., author of Do Unto Others and Living Each Week

"I like to study with Rabbi Telushkin and I only hope that learning from The Book of Jewish Values will be as exhilarating for you as it has been for me." —Kirk Douglas

"Intellectually exciting and inspirational—itself an uncommon combination—The Book of Jewish Values is filled with hundreds of ways to become a kinder and deeper person. The values described here blossom into a code for life." —David Woznica, director of the Bronfman Center for Jewish Life, 92nd Street Y, New York City

"Everyone can benefit from this treasure trove of Jewish menschlichkeit. On Day 20, we are taught not to speak unless we have something to say. Rabbi Telushkin has something very important to say. So do the wise men and women he quotes. Read this wonderful guide and use it. It will make you a better person." —Alan M. Dershowitz, author of Just Revenge