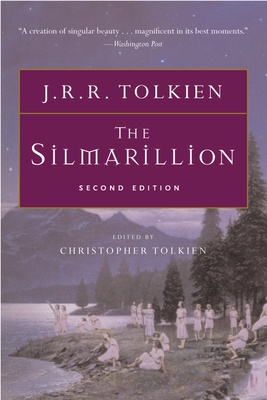 
Not On Our Shelves—Ships in 1-5 Days
A number-one New York Times bestseller when it was originally published, THE SILMARILLION is the core of J.R.R. Tolkien's imaginative writing, a work that he could not publish in his lifetime because it grew with him. Its origins stretch back to a time long before THE HOBBIT. But THE HOBBIT was caught up in what Tolkien called "the branching acquisitive theme" he began in THE SILMARILLION, and eventually THE LORD OF THE RINGS emerged from this as well.
Tolkien considered THE SILMARILLION his most important work, and, though it was published last and posthumously, this great collection of tales and legends clearly sets the stage for all his other works. This is the story of the creation of the world and the happenings of the First Age, the ancient drama to which the characters in THE LORD OF THE RINGS look back and in whose events some of them, such as Elrond and Galadriel, took part.
The three Silmarils were jewels created by Feanor, the most gifted of the Elves. Within them was imprisoned the Light of the Two Trees of Valinor before the Trees themselves were destroyed by Morgoth, the first Dark Lord. Thereafter, the unsullied Light of Valinor lived on only in the Silmarils, but they were seized by Morgoth and set in his crown, which was guarded in the impenetrable fortress of Angband in the north of Middle-earth. THE SILMARILLION is the history of the rebellion of Feanor and his kindred against the gods, their exile from Valinor and return to Middle-earth, and their war, hopeless despite all their heroism, against the great Enemy.
The book includes several other, shorter works in addition to THE SILMARILLION. Preceding it are "The Ainulindale," a myth of the Creation, and "The Valaquenta," in which the nature and power of the gods is set forth. After THE SILMARILLION comes "The Akallabeth," a tale of the downfall of the kingdom of Numeno, and finally "Of the Rings of Power," the connecting link to THE LORD OF THE RINGS.
This second edition features a number of minor textual corrections along with a letter written by J.R.R. Tolkien describing his intentions for the work, written more than twenty-five years before its eventual publication. As described by Christopher Tolkien in the preface, it serves as a brilliant exposition of his conception of the earlier Ages of Middle-earth.
J.R.R. TOLKIEN (1892–1973) is the creator of Middle-earth and author of such classic and extraordinary works of fiction as The Hobbit, The Lord of the Rings, and The Silmarillion. His books have been translated into more than fifty languages and have sold many millions of copies worldwide.

"A creation of singular beauty... magnificent in its best moments." — The Washington Post