Sent Before Their Time: Genius, Charisma, and Being Born Prematurely (Paperback) 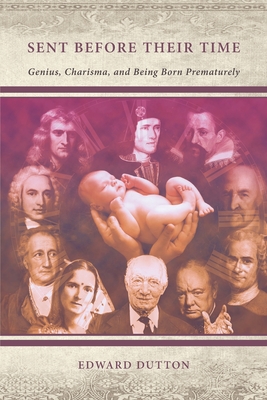 Sent Before Their Time: Genius, Charisma, and Being Born Prematurely (Paperback)

What do Sir Isaac Newton, Johannes Kepler, and Buddha have in common? They were all born prematurely. Tiny, weak, and brain-damaged, they very nearly didn't survive. But, just about pulling-through, they went on to change the world. And so did Rousseau, Goethe, and Moses, despite being born tiny and many months early. In Sent Before Their Time, Edward Dutton, who was born 3 months early himself, explores the massive and disproportionately high impact that people born prematurely or with low birth weight have had on world history. He shows that the mental characteristics caused by being born prematurely - being a 'preemie' - are precisely those that have always been associated with the heights of genius and of spell-binding charisma. And Dutton, whose analysis includes an eye-opening account of his own preemie childhood, presents an evolutionary theory for preterm birth, arguing that under the harsh Darwinian conditions that existed before the Industrial Revolution, the group with the optimum number of surviving preterm children - and, therefore, geniuses and inspiring people - would have been better able to win wars against other groups and, thus, triumph in the battle of Darwinian selection.