Caught In The Act: A Memoir by Courtney Act (Hardcover) 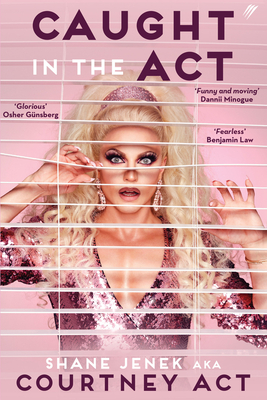 Caught In The Act: A Memoir by Courtney Act (Hardcover)


Not On Our Shelves—Ships in 1-5 Days
Boy, girl, artist, advocate. Courtney is more than the sum of her parts.

Meet Shane Jenek. Raised in the suburbs of Brisbane, Australia, by loving parents, Shane realises from a young age that he’s not like all the other boys. At a performing arts agency he discovers his passion for song, dance and performance, and makes a promise to himself: to find a bigger stage.

Meet Courtney Act. Born around the turn of the millennium, Courtney makes her name in the gay bars of Sydney. Years later, she makes star turns on RuPaul’s Drag Race and Celebrity Big Brother UK, bringing her unique take on drag and gender to the world.

Behind this rise to global fame is a story of searching for and finding oneself. Told with Courtney’s trademark candour and wit, Caught in the Act is about our journey towards understanding gender, sexuality and identity. It’s an often hilarious and at times heartbreaking memoir from a beloved drag and entertainment icon. Most of all, it’s a bloody good time.

Courtney Act is a drag artist, singer, advocate and cultural provocateur. She has appeared on various reality TV shows, making the top 3 on RuPaul’s Drag Race Season 6 and taking the UK by storm on Celebrity Big Brother, which she won. When Courtney isn’t busy being glamorous on TV and stage, she’s a boy from Australia called Shane Jenek. As a gender-fluid, queer person, Courtney uses her public profile to educate audiences on issues such as gender identity, sexuality, marriage equality, anti-racism and more. As a singer-songwriter she has released a pop EP and entertained audiences in her cabaret shows throughout the world. She currently splits her time following Pride parades and chasing summer between London, Los Angeles and Sydney.
"Caught in the Act is an incredibly insightful memoir of the life of one of my dearest friends. As close as we are, it actually gave me a deeper understanding of my little “'Pussyface'. Personally, my favourite parts were on pages 7, 32, 204, 236, 244–249, 255, 257, 277, 278, 284, 293, 323 and 324. The pages where I’m mentioned.’ —Bianca Del Rio

‘Courtney Act is a great storyteller, and let’s just say she’s been around long enough to have a lot of stories. 10 out of 10, would recommend.’ —Bob the Drag Queen

‘Funny, smart, kind and entirely addictive, this is a glorious insight into an exceptional life. A road map for anyone who feels different and wants to let that side of themself shine.’ —Matt Lucas

‘In a world where there are now more drag queens than pubs, it’s hard to stand out. You need to be pretty, witty and unstoppable. Courtney is all three and more. I love this book.’ —Boy George

‘Shane is such a legend, I’m not even surprised that this book is so awesome. All the laughs, all the feels – what an unreal read. Get down and get with it.’ —Nat’s What I Reckon