All 'Beings' Are of Equal Value - Consciousness and the Pursuit of Excellence In Service to Self and In Service to All Beings: A Blueprint for the New (Paperback) 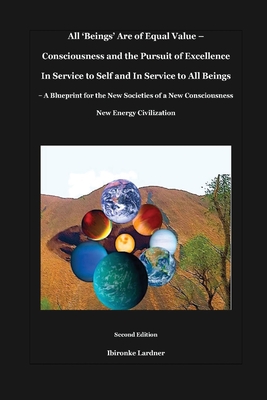 All 'Beings' Are of Equal Value - Consciousness and the Pursuit of Excellence In Service to Self and In Service to All Beings: A Blueprint for the New (Paperback)

All 'Beings' Are of Equal Value: Consciousness and the Pursuit of Excellence In Service to Self and In Service to All Beings. Blueprint is a simple description of the author's vision for a blueprint for the creation of the New Societies of a New Consciousness Civilization on Earth, based on the principles of her spiritual viewpoint. As a Being birthed by God The Creator The Eternal Infinite Living Void of Consciousness, you are God Also and Co-creator of life, the Earth, the Universe and Creation. As God Also, all Beings are created equal and are valuable beyond measure. As such, all Beings are of the same value and therefore, All 'Beings' Are of Equal Value. Therefore, All 'Beings' Are Equal. With this understanding comes the realization that there is no need to use the artificial medium of money to give artificial values to anyone and to define most things in society; and there is no Divine Law anywhere that proclaims that humanity must forevermore make use of the artificial medium of money. Human Beings do not need money in order to survive, thrive and evolve. Ergo a New Consciousness Civilization based on the principle that All 'Beings' Are of Equal Value, where money and all its related systems, structures, institutions and values cease to exist. A New Consciousness Civilization in which the current unrelenting pursuit of profit, as well as all the other money-based values that underpin human civilization and motivate human society today, are replaced by a new Standard: The Pursuit of Excellence In Service to Self and In Service to All Beings, thereby creating a civilization where the governing of a country is truly of the people, by the people, for the people. A civilization of sophisticated simplicity where, rther than spending their lives serving and conforming to systems, structures and technology, and to governments that spend an inordinate amount of time and energy dictating and enforcing levels of poverty on their citizens, humanity's constant striving for a higher consciousness and a deeper awareness ensures that systems, structures and in particular, technology, are put in place purely to serve all Beings and enable them to live a life of ease and grace.