The Sense of Style: The Thinking Person's Guide to Writing in the 21st Century (Hardcover) 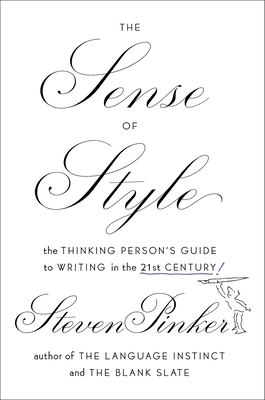 The Sense of Style: The Thinking Person's Guide to Writing in the 21st Century (Hardcover)


Not On Our Shelves—Ships in 1-5 Days
From the author of Enlightenment Now, a short and entertaining book on the modern art of writing well by New York Times bestselling author Steven Pinker.

Why is so much writing so bad, and how can we make it better? Is the English language being corrupted by texting and social media? Do the kids today even care about good writing? Why should any of us care?

In The Sense of Style, the bestselling linguist and cognitive scientist Steven Pinker answers these questions and more. Rethinking the usage guide for the twenty-first century, Pinker doesn’t carp about the decline of language or recycle pet peeves from the rulebooks of a century ago. Instead, he applies insights from the sciences of language and mind to the challenge of crafting clear, coherent, and stylish prose.

In this short, cheerful, and eminently practical book, Pinker shows how writing depends on imagination, empathy, coherence, grammatical knowhow, and an ability to savor and reverse engineer the good prose of others. He replaces dogma about usage with reason and evidence, allowing writers and editors to apply the guidelines judiciously, rather than robotically, being mindful of what they are designed to accomplish.

Filled with examples of great and gruesome prose, Pinker shows us how the art of writing can be a form of pleasurable mastery and a fascinating intellectual topic in its own right.
Steven Pinker is the Harvard College Professor of Psychology at Harvard University. A two-time Pulitzer Prize finalist and the winner of many awards for his research, teaching, and books, he has been named one of Time's 100 Most Influential People in the World Today and Foreign Policy's 100 Global Thinkers.
Praise for The Sense of Style

“[The Sense of Style] is more contemporary and comprehensive than “The Elements of Style,” illustrated with comic strips and cartoons and lots of examples of comically bad writing. [Pinker’s] voice is calm, reasonable, benign, and you can easily see why he’s one of Harvard’s most popular lecturers.”
—The New York Times

“Pinker's linguistical learning…is considerable. His knowledge of grammar is extensive and runs deep. He also takes a scarcely hidden delight in exploding tradition. He describes his own temperament as "both logical and rebellious." Few things give him more pleasure than popping the buttons off what he takes to be stuffed shirts.”
—The Wall Street Journal

“[W]hile The Sense of Style is very much a practical guide to clear and compelling writing, it’s also far more…. In the end, Pinker’s formula for good writing is pretty basic: write clearly, try to follow the rules most of the time—but only the when they make sense. It’s neither rocket science nor brain surgery. But the wit and insight and clarity he brings to that simple formula is what makes this book such a gem.”
—Time.com

“Erudite and witty… With its wealth of helpful information and its accessible approach, The Sense of Style is a worthy addition to even the most overburdened shelf of style manuals.”
—Shelf Awareness

“Forget Strunk and White’s rules—cognitive science is a surer basis for clear and cogent writing, according to this iconoclastic guide from bestselling Harvard psycholinguist Pinker... Every writer can profit from—and every writer can enjoy—Pinker’s analysis of the ways in which skillfully chosen words engage the mind.”
—Publishers Weekly (starred)

“Yet another how-to book on writing? Indeed, but this is one of the best to come along in many years, a model of intelligent signposting and syntactical comportment…Pinker's vade mecum is a worthy addition to any writer’s library.”
—Kirkus Reviews

“In this witty and practical book on the art of writing, Pinker applies insights from the sciences of language and mind to the crafting of clear, elegant prose: #requiredreading.”
—Publishers Weekly, PW pick Fall 2014 Announcements

“Who better than a best-selling linguist and cognitive scientist to craft a style guide showing us how to use language more effectively?”
—Library Journal

“[A] dense, fascinating analysis of the many ways communication can be stymied by word choice, placement, stress, and the like. [Pinker’s] explanations run rich and deep, complemented by lists, cartoons, charts on diagramming sentences, and more.”
—Booklist

“This book is a graceful and clear smackdown to the notion that English is going to the proverbial dogs. Pinker has written the Strunk & White for a new century while continuing to discourage baseless notions such as that the old slogan should have been ‘Winston tastes good AS a cigarette should.’”
—John McWhorter, author of Our Magnificent Bastard Tongue and The Power of Babel

“Great stuff! Only Steven Pinker could have written this marvelous book, and thank heaven he has. ‘Good writing can flip the way the world is perceived,’ he writes, and The Sense of Style will flip the way you think about good writing. Pinker’s curiosity and delight illuminate every page, and when he says style can make the world a better place, we believe him.”
—Patricia T. O’Conner, author of Woe Is I and, with Stewart Kellerman, Origins of the Specious

Praise for The Better Angels of Our Nature

"One of the most important books I've read--not just this year, but ever."
—Bill Gates

Praise for The Stuff of Thought

"A display of fiercely intricate intelligence."
—The Times (London)

"Engaging and provocative . . . It's good to have a mind as lively and limpid as his bringing the ideas of cognitive science to the public."
—Douglas Hofstadter, Los Angeles Times

Praise for The Blank Slate

"Ought to be read by anybody who . . . thinks they already know where they stand on the science wars. . . . It could change their minds."
—The Economist

"Pinker is a star, and the world of science is lucky to have him." —Richard Dawkins