Protestants: The Faith That Made the Modern World (Hardcover) 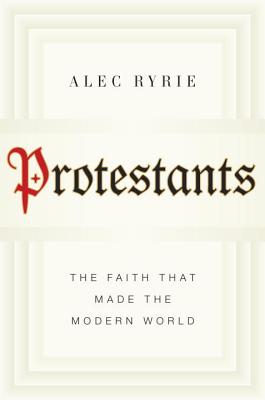 Protestants: The Faith That Made the Modern World (Hardcover)


Special Order—Subject to Availability
On the 500th anniversary of Luther’s theses, a landmark history of the revolutionary faith that shaped the modern world.

"Ryrie writes that his aim 'is to persuade you that we cannot understand the modern age without understanding the dynamic history of Protestant Christianity.' To which I reply: Mission accomplished."
–Jon Meacham, author of American Lion and Thomas Jefferson

Five hundred years ago a stubborn German monk challenged the Pope with a radical vision of what Christianity could be. The revolution he set in motion toppled governments, upended social norms and transformed millions of people's understanding of their relationship with God. In this dazzling history, Alec Ryrie makes the case that we owe many of the rights and freedoms we have cause to take for granted--from free speech to limited government--to our Protestant roots.

Fired up by their faith, Protestants have embarked on courageous journeys into the unknown like many rebels and refugees who made their way to our shores. Protestants created America and defined its special brand of entrepreneurial diligence. Some turned to their bibles to justify bold acts of political opposition, others to spurn orthodoxies and insight on their God-given rights. Above all Protestants have fought for their beliefs, establishing a tradition of principled opposition and civil disobedience that is as alive today as it was 500 years ago. In this engrossing and magisterial work, Alec Ryrie makes the case that whether or not you are yourself a Protestant, you live in a world shaped by Protestants.
Alec Ryrie was born in London and grew up in Washington DC. He graduated from Cambridge University with a double First in History and received a doctorate in Theology from Oxford University. He is now Professor of the History of Christianity at Durham University and a licensed minister in his local church. An expert on the Reformation in England and Scotland, he is the author of the prizewinning Being Protestant in Reformation Britain and The Sorcerer's Tale: Faith and Fraud in Tudor England and is co-editor of the Journal of Ecclesiastical History.
"In this compelling and sweeping book, Alec Ryrie charts the history of one of the greatest forces in the making of modernity: the rise of the Protestant faith and ethos. Without it, one is hard-pressed to envision the spread of capitalism or of democracy. Ryrie writes that his aim 'is to persuade you that we cannot understand the modern age without understanding the dynamic history of Protestant Christianity.' To which I reply: Mission accomplished." - Jon Meacham, author of American Lion and Thomas Jefferson

"A sweeping, wonderful book.... We no longer understand that the world wasn't always this way, that we didn't always have things like freedom of speech, freedom of religion, or the concept of limited government." - Eric Metaxas, author of Martin Luther, on The Eric Metaxas Show

"To cover the story of Protestantism in just 514 pages might seem a recklessly task. But Ryrie has succeeded magnificently. He writes with the affection of an insider and the judgment of a first-class historian, and is excellent at conveying the sheer excitement, passion and violence that have marked Protestantism's story." - The Sunday Times

"An astonishment of narrative sweep and close analysis, transforming a familiar subject into one not seen before, Protestants is a breathtakingly original charting of the God-driven current running below the surface of the West, and, now, the world. In its triumphs and tragedies, Alec Ryrie illuminates faith, yes; but the real revelation here is human life itself - its intelligence, open-endedness, hope." - James Carroll, author of Christ Actually and Constantine's Sword

"Comprehensive and highly readable... One of the world's leading authorities on the Protestant Reformation. . . He is a particularly graceful and humane writer -- a very kind person, you feel -- qualities that serve him well in a history this divisive and contentious." - Dallas Morning News

“Ryrie does more than simply repeat the landmarks of Protestant history; he probes the minds and spirits of Protestants themselves . . . A particular strength of his work is the attention he gives to the “ordinary” people who make up the Protestant movement—men and women who turn out to be rather extraordinary . . . Ryrie has given us an impressive biography of the overall Protestant movement. Above all, he has demonstrated how contemporary Western life was founded on Europe’s response to the Protestant faith, rendering it, in the words of his subtitle, “the faith that made the modern world.” – The Gospel Coalition

"A masterly history. . . Rare is the historian who is as instructive about Christianity in Asia as he is about churches in the West, yet Ryrie manages both." - The Wall Street Journal

“To his credit, Alec Ryrie has braved treacherous waters …..Protestants succeeds in fulfilling his ambition to show how understanding Protestantism is necessary to any explanation of the modern age…Ryrie’s skill at writing, seasoned with just enough wit, keeps the narrative moving… He has woven together an epic tale that not only reminds Protestants of their relations…but calls them back to a love divine, all loves excelling.” – Christianity Today

"Informative and stimulating... Ryrie is as eloquent as he is erudite." - Financial Times

“Ryrie's agile mind, pithy style and energetic narrative bring 500 years of Protestant history to life. Protestants is shrewd, incisive and proceeds at an astonishing pace. If you wish to buy one book to understand the impact Martin Luther has had on the modern world, this is it.”
–Bishop Graham Kings, Mission Theologian in the Anglican Communion

"What a treat this book is. Its scholarship showcases one of the leading historians of Protestantism writing today, but the delight of it is the crisp prose, cool wit, wise judgements and sheer scope from the gates of Wittenberg to the streets of Seoul.  Ryrie has a gift for showing how the history of religion is the history of people, in all their baffling, frightening or endearing variety."  - Diarmaid MacCulloch, author of Reformation and Christianity

"This is a book of breathtaking range and penetrating insight. It will shape our perception of the Reformation and its long shadow for years to come."  - Andrew Pettegree, author of Brand Luther

“A book about Protestants could so easily mirror crude stereotypes. Protestants are supposedly staid, prudish, law-abiding and dull. Ryrie instead explores their infinite varity – the weird, wicked and wonderful.” – Sunday Times, Book of the Year

“Theology is morality is politics is law – and whether or not it’s immediately obvious, the world is steeped in theology… Ryrie’s central contention is that the Reformation changed the ideological contours of Europe by toppling the traditional sources of authority – indeed, the stability of any world authority whatsoever. By doing so, it hastened or precipitated the rise of modernity.” – The Nation

"Protestants is spectacularly good. Ryrie writes with empathy but without illusions; his trademark combination of wit and erudition makes the journey as enjoyable as it is enlightening." - Prof. Peter Marshall, author of Heretics and Believers

"A learned, lively...look at the various faiths lumped together as Protestant, from Martin Luther in the 16th century to today...Rarely has an author of such deep faith offered such a tolerant, engaging history of any religion." - Kirkus Reviews (starred)

"This sweeping and thought-provoking book may prove a bible of the Protestant quincentenary.”
--Booklist (starred)