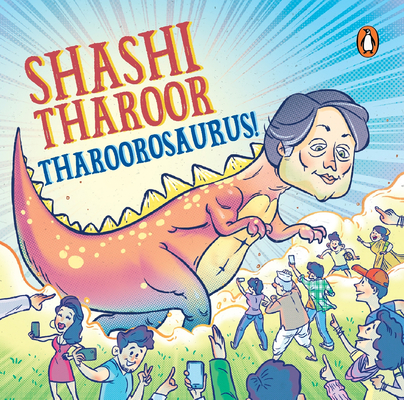 
Not On Our Shelves—Ships in 1-5 Days
Shashi Tharoor is the wizard of words. In Tharoorosaurus, he shares fifty-three examples from his vocabulary: unusual words from every letter of the alphabet. You don't have to be a linguaphile to enjoy the fun facts and interesting anecdotes behind the words! Be ready to impress-and say goodbye to your hippopotomonstrosesquipedaliophobia!
SHASHI THAROOR is the bestselling author of twenty books, both fiction and non-fiction, besides being a noted critic and columnist. His books include the path-breaking satire The Great Indian Novel (1989), the classic India: From Midnight to the Millennium (1997), the bestselling An Era of Darkness: The British Empire in India, for which he won the Ramnath Goenka Award for Excellence in Journalism, 2016, for Books (Non-Fiction), and The Paradoxical Prime Minister: Narendra Modi and His India. He has been Under Secretary-General of the United Nations and Minister of State for Human Resource Development and Minister of State for External Affairs in the Government of India. He is a three-time member of the Lok Sabha from Thiruvananthapuram and chairs the Parliament's Information Technology committee. He has won numerous literary awards, including a national Sahitya Akademi Award, a Commonwealth Writers' Prize and the Crossword Lifetime Achievement Award. He was awarded the Pravasi Bharatiya Samman, India's highest honour for overseas Indians, in 2004, and honoured as New Age Politician of the Year (2010) by NDTV.