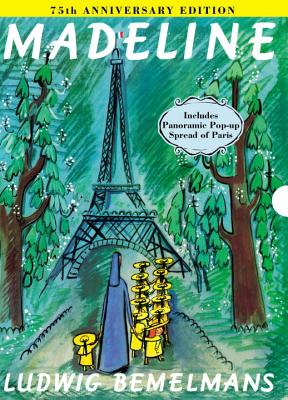 
Special Order—Subject to Availability
Seventy-five years ago, a spirited little red-headed girl stepped out of the pages of a book and into the hearts of readers. Madeline may have been the smallest of the twelve little girls who always walked in two straight lines, but she was the bravest—to the tiger in the zoo, Madeline just said “pooh- pooh”.

Madeline went on to inspire eight sequels, as well as television and movies, dolls and teasets and games. She is loved by millions of readers all over the world.

To commemorate this anniversary, this lavish slipcased edition of the original Madline book includes a full-color panoramic pop up spread of Paris, with all the famous landmarks, including Madeline’s house.

Happy 75th birthday, Madeline!
Ludwig Bemelmans was a painter, illustrator, and writer for both children and adults. A world traveler, he spent most of his time in New York City or Paris. The original inspiration for Madeline was the result of a bicycle accident of an island of France. Hospitalized after being hit by the only car on the island, Mr. Bemelmans recalled, “The sisters in that small hospital wore large, starched white hats that looked like the wings of a giant butterfly. In the room next to mine was a little girl who had had her appendix out. In the ceiling over my bed was a crack ‘that had the habit of sometimes looking like a rabbit.’” A year later, back in New York City, he penned the first draft of Madeline on the backs of menus in Pete’s Tavern. The Madeline books rank among the most honored children’s books series. Madeline was named a Caldecott Honor Book, and the first of its five sequels, Madeline’s Rescue, won the Caldecott Medal and was a New York Times Outstanding Book of the Year. Mr. Bemelmans died in 1962, after completing Madeline’s Christmas.