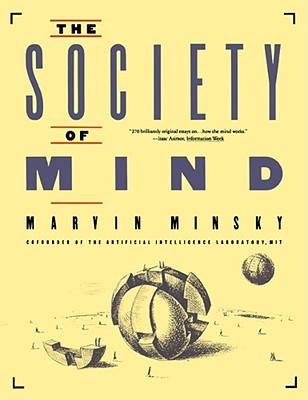 
Special Order—Subject to Availability
Marvin Minsky -- one of the fathers of computer science and cofounder of the Artificial Intelligence Laboratory at MIT -- gives a revolutionary answer to the age-old question: "How does the mind work?"
Minsky brilliantly portrays the mind as a "society" of tiny components that are themselves mindless. Mirroring his theory, Minsky boldly casts The Society of Mind as an intellectual puzzle whose pieces are assembled along the way. Each chapter -- on a self-contained page -- corresponds to a piece in the puzzle. As the pages turn, a unified theory of the mind emerges, like a mosaic. Ingenious, amusing, and easy to read, The Society of Mind is an adventure in imagination.
Marvin Minsky is Toshiba Professor of Media Arts and Sciences, and Professor of Electrical Engineering and Computer Science at the Massachusetts Institute of Technology. His research has led to many advances in artificial intelligence, psychology, physical optics, mathematics, and the theory of computation. He has made major contributions in the domains of computer graphics, knowledge and semantics, machine vision, and machine learning. He has also been involved with technologies for space exploration.

Professor Minsky is one of the pioneers of intelligence-based robotics. He designed and built some of the first mechanical hands with tactile sensors, visual scanners, and their software and interfaces. In 1951 he built the first neural-network learning machine. With John McCarthy he founded the MIT Artificial Intelligence Laboratory in 1959. He has written seminal papers in the fields of artificial intelligence, perception, and language. His book The Society of Mind contains hundreds of ideas about the mind, many of which he has further developed in this book.
Issac Asimov Information Week 270 brilliantly original essays on...how the mind works.

Douglas Hofstadter author of Gödel, Escher, Bach and Metamagical Themas A stunning collage of staccato images, filled to the brim with witty insights and telling aphorisms.

The New York Times Book Review INGENIOUS...STIMULATING...crisp, packed with quips, aphorisms and homely illustrations. A pleasure to read...It will make you think. And that's what brains are for.

Gene Roddenberry creator of Star Trek A REMARKABLE BOOK....I am grateful that Marvin Minsky was my tour guide on this journey in the realms of my own consciousness.

San Jose Mercury News SCATTERED WITH GEMS....Liable to be influential far beyond the narrow researches of artificial intelligence.

Professor Guy Cellerier Genetic Artificial Intelligence and Epistemics Laboratory, University of Geneva A PROFOUND AND FASCINATING BOOK that lays down the foundations for the solution of one of the last great problems of modern science....Marks a new era.