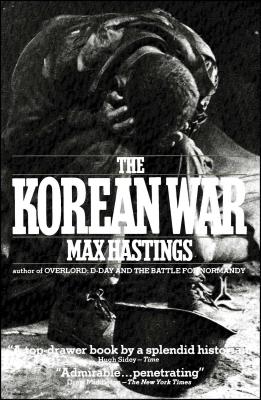 
Not On Our Shelves—Ships in 1-5 Days
It was the first war we could not win. At no other time since World War II have two superpowers met in battle.

Max Hastings—preeminent military historian—takes us back to the bloody bitter struggle to restore South Korean independence after the Communist invasion of June 1950. Using personal accounts from interviews with more than two-hundred vets—including the Chinese—Hastings follows real officers and soldiers through the battles. He brilliantly captures the Cold War crisis at home—the strategies and politics of Truman, Acheson, Marshall, MacArthur, Ridgway, and Bradley—and shows what we should have learned in the war that was the prelude to Vietnam.
Max Hastings is the author of The Korean War, Overlord, and Bomber Command and the coauthor of Battle for the Falklands. Editor of The Daily Telegraph, he lives in London, England.
Hugh Sidey Time A top-drawer book by a splendid historian.

Stephen E. Ambrose author of Eisenhower: The President and Nixon: The Education of a Politician Rings true and will surely stand the test of time....Max Hastings has no peer as a writer of battlefield history.

Richard M. Nixon Must reading for any American who wants to understand one of the watershed events of the post-World War II period.

Alistair Horne author of The Price of Glory Fair and immensely readable...a major contribution to more than just military history....Max Hastings is among the ablest of the younger generation of British military historians....He now illuminates the struggle that changed all perceptions of the post-1945 world.