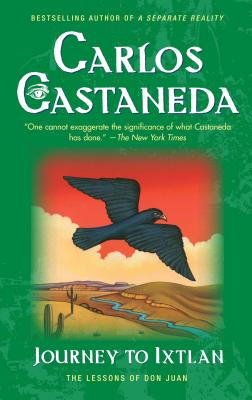 
Not On Our Shelves—Ships in 1-5 Days
In Journey to Ixtlan, Carlos Castaneda introduces readers to this new approach for the first time and explores, as he comes to experience it himself, his own final voyage into the teachings of don Juan, sharing with us what it is like to truly “stop the world” and perceive reality on his own terms.

Originally drawn to Yaqui Indian spiritual leader don Juan Matus for his knowledge of mind-altering plants, bestselling author Carlos Castaneda immersed himself in the sorcerer’s magical world entirely. Ten years after his first encounter with the shaman, Castaneda examines his field notes and comes to understand what don Juan knew all along—that these plants are merely a means to understanding the alternative realities that one cannot fully embrace on one’s own.
Born in 1925 in Peru, anthropologist Carlos Castaneda wrote a total of fifteen books, which sold eight million copies worldwide and were published in seventeen different languages. In his writing, Castaneda describes the teaching of don Juan, a Yaqui sorcerer and shaman. His works helped define the 1960's and usher in the New Age movement. Even after his death in 1998, his books continue to inspire and influence his many devoted fans.
Praise for the groundbreaking work of bestselling author Carlos Castaneda

"Staggeringly beautiful reading. Itself timeless, Journey to IXtlan is one of the important statements of our time."
— Book World