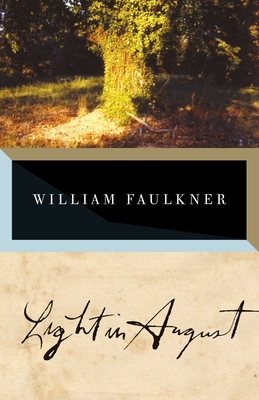 NOBEL PRIZE WINNER • A novel set in the American South during Prohibition about hopeful perseverance in the face of mortality—from one of the most highly acclaimed writers of the twentieth century.

Light in August features some of Faulkner’s most memorable characters: guileless, dauntless Lena Grove, in search of the father of her unborn child; Reverend Gail Hightower, who is plagued by visions of Confederate horsemen; and Joe Christmas, a desperate, enigmatic drifter consumed by his mixed ancestry.

“Read, read, read. Read everything—trash, classics, good and bad, and see how they do it. Just like a carpenter who works as an apprentice and studies the master. Read! You’ll absorb it. Then write. If it is good, you’ll find out. If it’s not, throw it out the window.” —William Faulkner

WILLIAM CUTHBERT FAULKNER was born in 1897 and raised in Oxford, Mississippi, where he spent most of his life. One of the towering figures of American literature, he is the author of The Sound and the Fury, Absalom, Absalom!, and As I Lay Dying, a,ong many other remarkable books.Faulkner was awarded the Nobel Prize in 1950 and France’s Legion of Honor in 1951. He died in 1962.

“No man ever put more of his heart and soul into the written word than did William Faulkner. If you want to know all you can about that heart and soul, the fiction where he put it is still right there.” —Eudora Welty

“Faulkner’s greatness resided primarily in his power to transpose the American scene as it exists in the Southern states, filter it through his sensibilities and finally define it with words.” —Richard Wright