Refuge: An Unnatural History of Family and Place (Paperback) 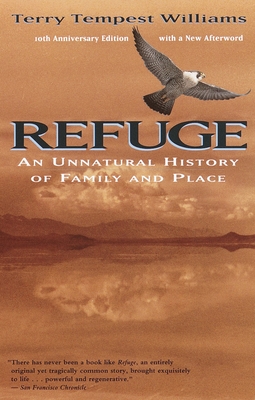 Refuge: An Unnatural History of Family and Place (Paperback)


In Stock—Click for Locations
In the spring of 1983 Terry Tempest Williams learned that her mother was dying of cancer. That same season, The Great Salt Lake began to rise to record heights, threatening the Bear River Migratory Bird Refuge and the herons, owls, and snowy egrets that Williams, a poet and naturalist, had come to gauge her life by. One event was nature at its most random, the other a by-product of rogue technology: Terry's mother, and Terry herself, had been exposed to the fallout of atomic bomb tests in the 1950s. As it interweaves these narratives of dying and accommodation, Refuge transforms tragedy into a document of renewal and spiritual grace, resulting in a work that has become a classic.
Terry Tempest Williams is the award-winning author of fifteen books, including Refuge: An Unnatural History of Family and Place, Finding Beauty in a Broken World, When Women Were Birds, and, most recently, The Hour of Land. Her work has been widely anthologized around the world. She lives in Castle Valley, Utah, with her husband, Brooke Williams.
"There has never been a book like Refuge, an entirely original yet tragically common story, brought exquisitely to life."
—San Francisco Chronicle

"Moving and loving... both a natural history of an ecological phenomenon [and] a Mormon family saga... A heroic book."
—The Washington Post Book World

"A record of loss, healing grace, and the search for a human place in nature's large design. Terry Tempest Williams's courage is matched by the earnest beauty of her language and the keen compassion of her observations." —Louise Erdrich

"The wonderful thing about Refuge is that Terry Williams is too full of life herself, and too fascinated by all its manifestations, to write a gloomy book. There isn't a page in Refuge that doesn't whistle with the sound of wings." —Wallace Stegner

"Brilliantly conceived... one of the most significant environmental essays of our time." —The Kansas City Star