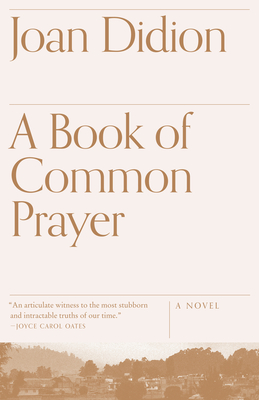 A shimmering novel of innocence and evil: the gripping story of two American women in a failing Central American nation, from the bestselling, award-winning author of The Year of Magical Thinking and Let Me Tell You What I Mean

"[Didion's] most ambitious project in fiction, and her most successful ... glows with a golden aura of well-wrought classical tragedy.”  —Los Angeles Times Book Review

Grace Strasser-Mendana controls much of Boca Grande's wealth and knows virtually all of its secrets; Charlotte Douglas knows far too little. "Immaculate of history, innocent of politics," Charlotte has come to Boca Grande vaguely and vainly hoping to be reunited with her fugitive daughter. As imagined by Didion, her fate is at once utterly particular and fearfully emblematic of an age of conscienceless authority and unfathomable violence.

A Book of Common Prayer is written with the telegraphic swiftness and microscopic sensitivity that have made Didion one of our most distinguished journalists.

JOAN DIDION was born in Sacramento in 1934 and graduated from the University of California, Berkeley, in 1956. After graduation, Didion moved to New York and began working for Vogue, which led to her career as a journalist and writer. Didion published her first novel, Run River, in 1963. Didion’s other novels include A Book of Common Prayer (1977), Democracy (1984), and The Last Thing He Wanted (1996).

In 2005, Didion was awarded the American Academy of Arts & Letters Gold Medal in Criticism and Belles Letters. In 2007, she was awarded the National Book Foundation’s Medal for Distinguished Contribution to American Letters. A portion of National Book Foundation citation read: "An incisive observer of American politics and culture for more than forty-five years, Didion’s distinctive blend of spare, elegant prose and fierce intelligence has earned her books a place in the canon of American literature as well as the admiration of generations of writers and journalists.” In 2013, she was awarded a National Medal of Arts and Humanities by President Barack Obama, and the PEN Center USA’s Lifetime Achievement Award.

Didion said of her writing: "I write entirely to find out what I’m thinking, what I’m looking at, what I see and what it means.” She died in December 2021.

"[Didion's] most ambitious project in fiction, and her most successful ... [it] glows with a golden aura of well-wrought classical tragedy.”  —Los Angeles Times Book Review

"An articulate witness to the most stubborn and intractable truths of our time, a memorable voice." —Joyce Carol Oates, The New York Times Book Review

"A novelist with important things to say about the dislocations of our time.... Joan Didion is stellar." —Newsday